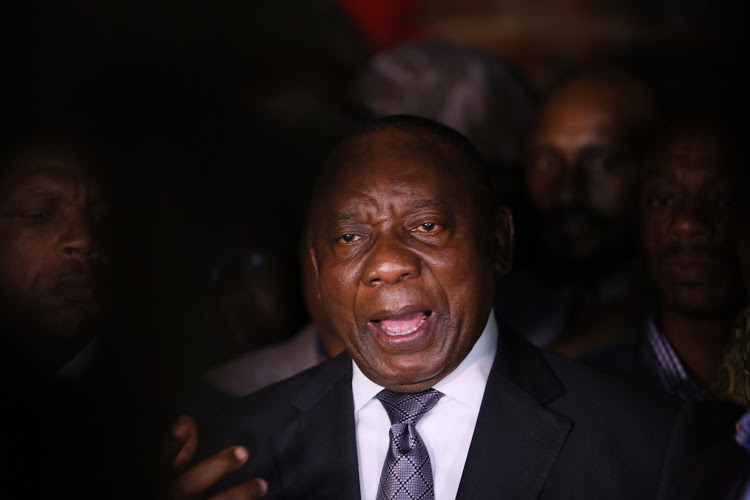 President Cyril Ramaphosa is demanding answers for an ANC delegation "hitching a ride" aboard a SANDF jet to meet the leaders of Zanu-PF in Zimbabwe.
Image: Alon Skuy

President Cyril Ramaphosa has directed defence and military veterans minister Nosiviwe Mapisa-Nqakula to furnish him, within 48 hours, with a detailed report on the circumstances that led to her sharing a flight to Zimbabwe with a senior ANC delegation.

A presidency statement issued on Friday evening said Ramaphosa had noted the public discussion that has been generated about the flight to Harare by Mapisa-Nqakula, who had permission to travel to Zimbabwe to meet her counterpart to discuss defence-related matters in the region after a recent Sadc summit.

“In the interest of good governance and the prudent and ethical use of state assets, the president has directed the minister to provide a report within 48 hours that will set out the circumstances about the flight and the passenger list,” read the statement.

It said Ramaphosa welcomed the interest shown by South Africans in this matter as an indication of the nation’s vigilance against allegations of improper deployment of public resources.

Opposition parties have accused the ANC of abusing public resources for party business after an ANC delegation sent to meet Zimbabwe's governing Zanu-PF used a military aircraft for the trip.

Freedom Front Plus leader Pieter Groenewald accused the ANC delegation of not only violating lockdown regulations, but also misusing taxpayers' money by travelling in the military's Falcon 900 aircraft.

President Cyril Ramaphosa is under fire over the use of an SANDF jet to ferry the ANC delegation led by party secretary-general Ace Magashule to ...
News
1 year ago

“In addition to that, a military aeroplane is being used without authorisation to transport ANC party members to Zimbabwe for party-political matters. This is nothing but the blatant misuse of tax money and corruption. The ANC must repay the costs,” said Groenewald.

He said he would be lodging a formal complaint with the public protector, and will request that the ANC's misuse of tax money be investigated.

The DA called on Ramaphosa, in his capacity as commander-in-chief of the SANDF, to clarify why an ANC-led delegation was able to fly to Zimbabwe in an air force jet.

“The delegation led by ANC secretary-general Ace Magashule, who holds no official government position, met officials from Zanu-PF. This was not a meeting between officials of the SA and Zimbabwean governments, but a meeting between the two political parties,” said Kobus Marais, the DA's spokesperson on defence.

Mbalula's excuse for trip to Zimbabwe: 'SANDF in charge of the skies'

Transport minister Fikile Mbalula has distanced himself from the use of a SANDF aircraft by defence minister Nosiviwe Mapisa-Nqakula and her ANC ...
News
1 year ago

Marais said they are not only calling for Ramaphosa to clarify “this brazen corruption” by his party, but for the ANC to immediately pay back the money spent on transporting its party delegation to Zimbabwe.

On Thursday, News24 quoted defence spokesperson Siphiwe Dlamini as having said the ANC meeting coincided with Mapisa-Nqakula's official work in Zimbabwe, and that she gave her ANC comrades a lift.

Transport minister Fikile Mbalula on Friday also distanced himself from the use of a SANDF aircraft by Mapisa-Nqakula and ANC comrades.

Mbalula referred all questions about the trip to Mapisa-Nqakula, saying the defence force did not need his approval for its trips. He said the military “was in charge of the skies” and therefore does not seek his permission as they are in charge of the security of the republic.