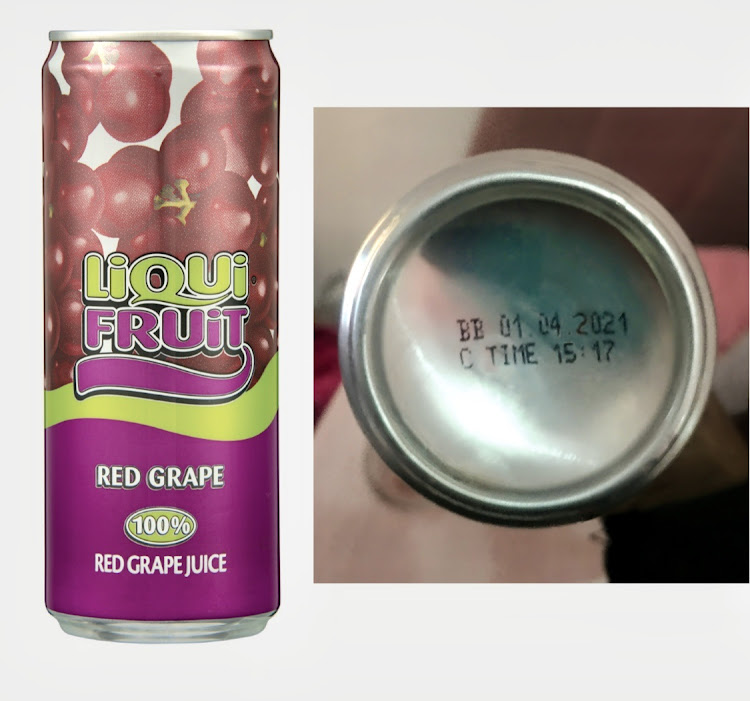 It's safe! The 'glass particles' in a batch of Liqui Fruit Red Grape Still 330ml can are actually potassium bitartrate crystals.
Image: Supplied

Pioneer Foods recalled about 270,000 cans of its Liqui Fruit grape juice after three consumers reported finding “small glass shards” in their cans, only to discover that the glass was, in fact, harmless cream of tartar crystals.

Two-thirds of the batch of grape juice cans in question was still in the food manufacturer’s warehouses or distribution centres when the recall was actioned, and the rest were being pulled off supermarket shelves as a precaution. This while a private lab in Stellenbosch ran tests to confirm what the glass-like “foreign objects” were.

There have been no reports of any consumers being harmed by the particles, Pioneer Foods says.

In newspaper adverts placed on Thursday, the company said the particles had been independently found to be “potassium bitartrate crystals”, a naturally occurring substance in products made from grapes, such as grape juice and wine.

“Crystallisation occurs under certain conditions, such as low temperature,” the adverts said. “In this case it occurred after processing and canning.”

“Potassium bitartrate is more commonly known as cream of tartar when used as a cooking aid.”

Asked to comment, Pioneer Foods CEO Tertius Carstens said because the crystals looked exactly like glass, the company was not prepared to put its customers at risk while waiting for the results of laboratory analysis of a sample provided by one of the complainants.

“We made the right call,” he said. “And we are continuing with the recall, because while it's a natural substance and it’s not toxic, those crystals should not be there,” he said.

Cartens said this was the first time crystallisation had occurred in Liqui Fruit grape juice, which is produced at Pioneer’s beverage plant in Ceres.

“Consumers are still advised not to consume or dispose of the product, but to return it to the retailer where it was purchased, for a full refund,” the advert reads.

“Pioneer Foods apologises for any anxiety and concern caused while we awaited the outcome of detailed analysis of the crystals.”

Prof Gunnar Sigge, head of Stellenbosh University’s Food Science department, said the use of potassium bitartrate or tartaric acid in foods within the recommended levels posed no health risk to humans.

An entire batch of Liqui Fruit red grape juice has been recalled after three consumers found “small shards of glass” in their 330ml cans.
News
1 year ago
Next Article