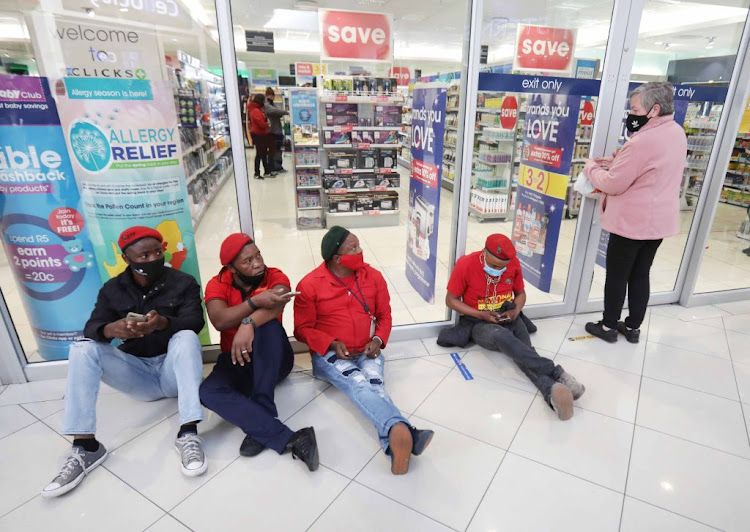 EFF members sit outside the entrance at Clicks at N1 City Mall, Cape Town, on September 10 2020. Clicks will resume normal operations after agreeing to a number of commitments with the EFF.
Image: ESA ALEXANDER/SUNDAY TIMES​

Health and beauty retailer Clicks has agreed to award five scholarships to black female students to pursue pharmaceutical qualifications in 2021 after meeting members of the EFF on Thursday.

The party released a joint statement with the retailer — at the centre of a storm over an offensive hair advert — saying that Clicks agreed the advert was racist.

“Clicks expresses its remorse to all South Africans, black women in particular, for the racist TRESemmé advert it published on its websites,” the EFF said in the statement.

The EFF said it had made it clear during the “constructive and robust” discussion that an apology alone was not enough. “The EFF made it clear that the days of apologies and sorry are over — and that there must be consequences for racism.”

The red berets said the parties had agreed that:

“In light of the above, the EFF and Clicks have put the matter in question to rest,” said the party. “The EFF calls off protest action at all Clicks stores with immediate effect. Clicks can now resume normal operations.”

The EFF had earlier on Thursday held a meeting with Unilever, the company that supplies TRESemmé products in SA. They agreed on a number of issues, including that Unilever would remove TRESemmé products from all stores for 10 days.

They also agreed that the company would donate 10,000 sanitary towels and sanitisers to informal settlements identified by the EFF.

Police have confirmed that the EFF MP who was arrested during protests against Clicks is Kenny Motsamai.
News
1 year ago
Next Article