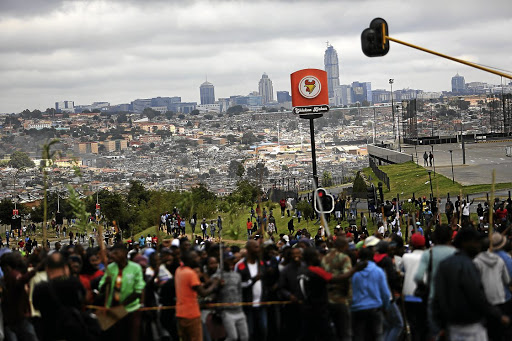 In April last year, Alexandra residents protested about crime in the area and the lack of service delivery. File image
Image: Alon Skuy

Parts of Alexandra in northern Johannesburg were declared no-go zones by irate residents on Wednesday when they reacted with anger to an early morning operation by City Power officials to curtail illegal electricity connections.

The section of River Park was cut off as mobs burnt tyres and barricaded roads before a tense standoff with riot police. Earlier,  police had used rubber bullets to disperse the crowd. Relative calm was restored by midday.

Those behind the civil unrest were vehement the area would remain cut off until illegal connections were restored.

“We are telling them 'don’t even try to come here'. The road is closed and will stay that way,” one man told SowetanLIVE sister publication TimesLIVE.

He said the community had been taken for granted, with services only delivered around election time to garner votes.

“These [City Power] officials are going to come back and charge us to put the electricity back, but then they come and cut us off,” the angry man said.

The City of Johannesburg has been hard-pressed to curb rampant electricity theft in suburbs.

Thousands of residents in Alexandra have been left in the dark for four days after a substation exploded when people tried to vandalise it.
News
1 year ago

Thousands of residents in Alexandra township in Johannesburg woke up to a second day without power on Thursday as technicians attended to a burnt out ...
News
1 year ago

Electricity woes for Johannesburg residents may be far from over if criminality and irresponsible use continue, City Power said on Tuesday.
News
1 year ago
Next Article