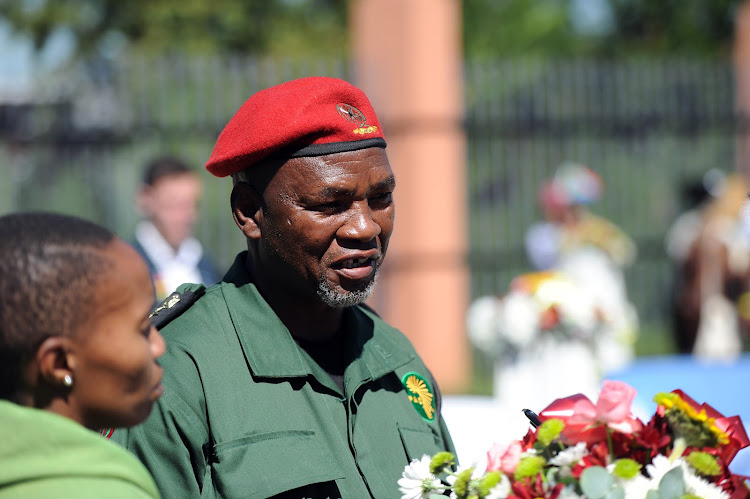 Police have confirmed that EFF MP Kenny Motsamai has been arrested and charged following a stand-off with police at the Clicks in Evaton.
Image: Gallo Images / Beeld / Felix Dlangamandla

Police have confirmed that the EFF MP who was arrested during protests against Clicks is Kenny Motsamai, who is on parole.

Brig Vishnu Naidoo said Motsamai had been arrested outside the Clicks at Evaton near Sedibeng on Tuesday morning.

He said Motsamai was involved in altercation with police after which he resisted arrest. “During the scuffle, the door of the Clicks broke and Mr Motsamai injured himself on the door,” said Naidoo.

Motsamai has since appeared at the Sedibeng magistrate’s court where he was granted bail. He faces charges of assaulting a police officer and resisting arrest. “He will appear in court on Monday again,” Naidoo said.

Naidoo said that Motsamai was the only one who was arrested during the Evaton incident but nine other people were arrested nationwide for unrest that broke out at Clicks stores amid protests led by the EFF.

Motsamai is out on parole after spending almost 28 years in prison for killing a white traffic officer in Rustenburg in 1989. The officer was killed amid a bank robbery sanctioned by the PAC. The proceeds from the robbery were to assist the PAC in its activities.

He was 26 years old when he was arrested and had just returned from Ethiopia after military training. He refused to apologise or show remorse for killing the traffic officer.

The outrage and action against Clicks started after the company ran an advertisement on its website last week which showed a black woman’s hair and described it as being “dry, damaged, frizzy and dull” against that of a white woman's hair, which was described as “colour-treated, fine, flat and normal”.

The EFF said the advert has racist undertones and called for those who approved it to be fired. The party vowed to shut Clicks stores this week as its members embarked on protests. Several Clicks stores were damaged in the unrest.

Clicks has since explained the advert was not theirs, but that of a client, TRESemme, which falls under Unilever. The company apologised for publishing the advertisement, took it down and suspended its officials who published it.

An EFF MP is among those arrested after destruction that occurred during protests at Clicks stores this week, police said on Wednesday
News
1 year ago
Next Article