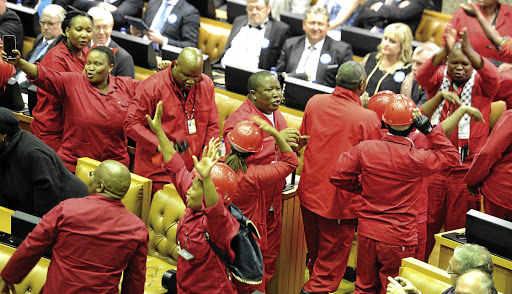 An EFF MP is among those arrested after protests at Clicks stores this week led to damage to property. File photo.
Image: File

An EFF MP is among those arrested after destruction that occurred during protests at Clicks stores this week, police said on Wednesday.

“Ten people, including an EFF MP, have been arrested for charges relating to the destruction of property. The MP has been charged with assaulting a police officer and resisting arrest,” read a statement from the office of police minister Bheki Cele.

The MP is yet to be named.

Cele called on police to protect Clicks staff, property and customers. He denounced the vandalism at several Clicks stores during the EFF-led protests. In Alberton, a store was trashed, while in Emalahleni a petrol bomb was thrown into a store in the early hours of Monday morning. The EFF has not taken responsibility for the destruction at the Emalahleni store.

In Port Elizabeth, a woman clashed with EFF protesters at a mall in Walmer Park. The 52-year-old woman was caught on video pointing a firearm at EFF members as they exchanged words.

HeraldLIVE reported she is possibly facing a charge after the EFF laid a criminal complaint against her. This comes after both parties initially declined to lay complaints.

Sowetan editor Nwabisa Makunga tells Tim Modise on @businessdaytv there’s no doubt the hair advert by Clicks was racist, but says the EFF’s protest actions must be interrogated.

The outrage and action against Clicks started after the company ran an advertisement on its website last week which showed a black woman’s hair and described it as being “dry, damaged, frizzy and dull” against that of a white woman's hair, which was described as “colour-treated, fine, flat and normal”.

The EFF said the advert has racist undertones and called for those who approved the running of the advert to be fired. The party vowed to shut Clicks stores this week as its members embarked on protests.

Clicks  has since explained the advert was not theirs, but that of a client, TRESemme, which falls under Unilever. The company apologised for publishing the advertisement, took it down and suspended its officials who published it.

On Wednesday, the company decided to stop operations for the day to allow counselling for its staff members, who it said were traumatised by the protests.

Cele agreed the advert was disturbing.

“The genesis of this advert is glaring racism that is shown by this business and we must collectively condemn it at all costs. The demonstration of such blatant disregard and humiliation of African people can’t go unabated,” he said.

Cele, however, said violence would not be condoned and he welcomed the arrests.

“Police should ensure the rule of law is maintained. They must deal decisively with those who choose to break the law. I’m encouraged that officers are making arrests and urge them to continue to ensure the protection and safety of customers and staff members in the affected areas,” he said.

Health and beauty retail store, Clicks, which on Wednesday decided to shut the doors of all its stores after two days of protests by the EFF, said it ...
News
1 year ago