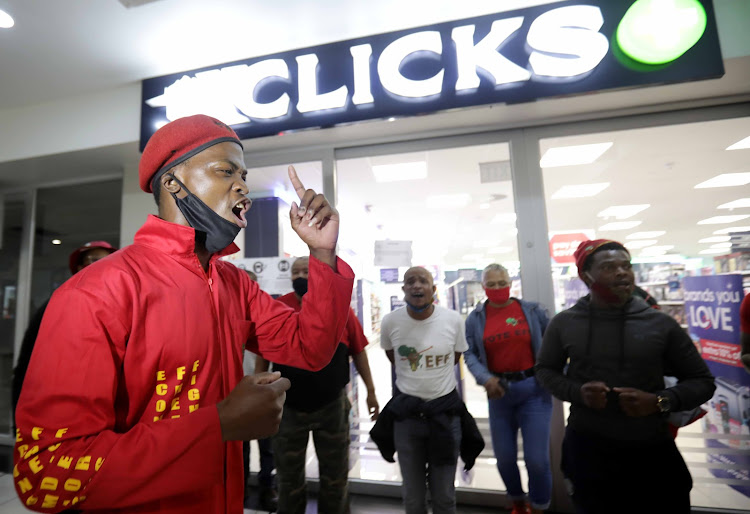 Members of the EFF blocked the entrance to the Clicks outlet in the Goodwood Mall in Cape Town.
Image: ESA ALEXANDER/SUNDAY TIMES​

Health and beauty retail store, Clicks, which on Wednesday decided to shut the doors of all its stores after two days of protests by the EFF, said it was offering counselling to its workers who were traumatised by the ordeal.

“We are closing today to attend to the wounds of our people because this thing has been traumatic. They have been in the front lines of the intimidation by the EFF,” said Clicks’ non-executive director Nonkululeko Gobodo during an interview on SAfm.

“We understand that people are angry and are protesting but the fact that our staff have now gone through this trauma of these violent attacks within our stores is really unfortunate,” she added.

Transformation is a journey. Clicks is not where it should be but it is ahead more than most

The outrage and protests against Clicks started after the company ran an advertisement on its website last week which showed a black woman’s hair and described it as being “dry, damaged, frizzy and dull” against that of a white woman's hair, which was described as “colour-treated, fine, flat and normal”.

The EFF said the advert had racist undertones and called for those who approved the running of the advert to be fired. The party vowed to shut Clicks operations for this week as its members embarked on protests across the country, causing damage to some of the stores.

Clicks has since clarified that the advert was not its own but belonged to one of its customers, TRESemme, which falls under Unilever. Clicks took down the advert, issued an apology and  suspended some of its staff over the advert. A senior executive decided to resign amid the furore.

Gobodo said while it may have been a TRESemme advert, Clicks would not shy away from taking accountability “for allowing our people to slip up such that this thing ended up on our website.”

“But I was asking management, how is it possible that our people can look at this image and think that it is normal. So it talks to our processes and it also talks to our diversity and inclusion ... which is why, as a board, we call for management to upskill our people,” she said.

Discrimination and racism, she said, were not a Clicks problem but a South African problem.

“Transformation is a journey. Clicks is not where it should be but it is ahead more than most,” she said, adding that 50% of its board is black and 40% of the board comprises women.

Clicks has resolved to remove TRESemme’s products from its shelves. Gobodo said it would be filling the gap with more local black suppliers.