Miracle birth for Durban mom while sedated, on ventilator for Covid-19 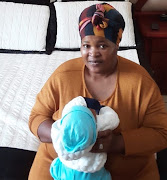 Image: supplied Nokuthula Gumede fought for her life in ICU for three weeks, during which time her baby boy had to be delivered by C-section.

Sedated and on a ventilator, Nokuthula Gumede fought for her life in the Netcare Kingsway Hospital’s intensive care unit (ICU) for three weeks, during which time her baby boy had to be delivered by caesarean section on July 17.

She had no memory of her time under sedation, nor of the birth of her baby. Her first words when she came around from sedation were, “Where is my baby?”

The Amanzimtoti mother was discharged from hospital with her baby on August 21.

She was 36 weeks pregnant when she developed severe Covid-19 complications requiring weeks in intensive care.

“Ms Gumede was in a serious condition and developed several complications, including a deep vein thrombosis, a blood clot, in her right leg, during her weeks in ICU, so she made a truly remarkable recovery which the staff at the hospital are all celebrating,” said Netcare Kingsway Hospital general manager Anna Demetriou.

“In fact her partner, who says that he would sometimes sit in his car outside the hospital and send her thoughts of strength and courage, considers her survival nothing short of a miracle.”

Demetriou said when Gumede was taken off ventilation, she was so overwhelmed with everything that had happened, that she was extremely emotional and crying uncontrollably.

“I think that thoughts of her little baby boy motivated her to recover, and it was indeed special to witness her meeting her precious baby in hospital for the first time after almost a month.”

Gumede went to the hospital on July 13 and was immediately admitted for a suspected Covid-19 infection. A diagnosis was confirmed the following day.

Pulmonologist Dr Sabeer Abdool Gaffar said she had been coughing and suffering from shortness of breath.

“X-rays revealed Covid-19-related pneumonia in both lungs and she was admitted to the hospital’s ICU and placed on a ventilator to support her breathing,” Netcare said on Tuesday. “According to Dr Gaffar, Ms Gumede’s condition deteriorated rapidly over the next couple of days. Dr Gaffar, gynaecologist Dr Nitasha Magan and nephrologist Dr Priyesh Mody consulted and together concluded that the baby would have to be delivered immediately via caesarean section to save the mother’s life.”

Demetriou said the baby, who was delivered four weeks early, thrived in the neonatal ICU.

“Ms Gumede’s eldest daughter, Anele Samkelisiwe, committed to keeping her little brother well and took him under her wing while her mother was ill. She spent many hours with him in hospital, bonding and getting to know his intricate habits. Confident that her mother would beat the virus, she showed the most wonderful and inspiring commitment to her mother and her little brother,” she said.

Gaffar said though Gumede was still weak, undergoing physiotherapy and using a walking stick, she continues to recover strongly.

She will remain on a blood thinning medication for the next six months to reduce the risk of her suffering any further blood clots, he added.

“Ms Gumede was extremely ill and with such an unpredictable initial prognosis, we were deeply concerned about whether she would survive. That she did is in no small part due to the excellent care she received from the nursing staff at the hospital, who should be commended for their considerable efforts during the pandemic,” said Gaffar.

“For me personally, it is most rewarding to have been involved in her treatment and we celebrate her recovery from Covid-19.

“We are pleased to see that the numbers of serious Covid-19 cases are decreasing in our region, and we are now seeing fewer patients. We nevertheless urge the members of the public to remain vigilant and to continue to protect themselves through the use of face masks, social distancing and regular washing of their hands as it is a highly infectious and unpredictable virus.”

“Covid-19 can be a life-threatening infection and many other patients do find that they are traumatised and depressed following hospitalisation and ventilation. For these reasons we are careful to provide patients with ongoing mental health support while in hospital and for up to six months following their experience.”