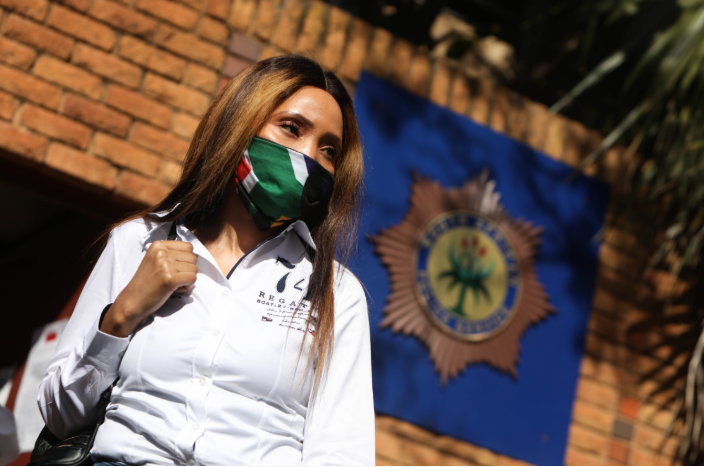 Norma Mngoma leaving the Brooklyn police station on August 4. She was there to collect her devices, seized during her arrest. File photo.
Image: Sunday Times/Alaister Russell

There was “nothing untoward” in the arrest of Norma Mngoma, wife of former finance minister Malusi Gigaba, and no messages were deleted from her electronic devices, the Hawks said in court papers on Tuesday.

The Hawks were responding to an urgent application by Mngoma to the Pretoria high court last week to declare her arrest unlawful and to set it aside. She was arrested in July on charges of malicious injury to property and crimen injuria after allegedly extensively scratching a Mercedes-Benz G-wagon and sending an “insulting” message to a friend of her husband, Peterson Siyaya.

The eye-popping WhatsApp message is attached to the court papers. Repeatedly calling Siyaya a dog, it accuses Siyaya of sleeping around with older women to get tenders and of influencing Gigaba to sleep around, of separating Gigaba from his true friends and family. It says “f***** all of you nengculaza [with your Aids]”.

“Uzohamba umphipha ke wonke amaphepha because ngizonihudula nobabili [You will go around wiping his ass in all newspapers because I will drag both of you],” says the message.

In her application, Mngoma said the arrest was an orchestrated scheme and a ruse to seize her electronic devices and delete specific information. She claimed e-mails and photos over specific periods had been deleted from her devices.

But in an affidavit on behalf of the Hawks, Capt Kenneth Mavuso said nothing was deleted by the Hawks when her devices were taken.

“No information was removed from the applicant’s phone(s) and/or any other electronic devices ... Any messages deleted from any devices were deleted by the applicant herself,” said Mavuso.

There is prima facie case for the applicant to answer.

He said that Mngoma does have a case to answer. The court papers also include an affidavit from the National Prosecuting Authority’s December Mthimunye, who said that “after perusal and analysing the contents of the two police dockets, there is prima facie case for the applicant to answer”.

In his affidavit Mavuso gives an explanation for why the Hawks from the Mpumalanga office had become involved in the arrest, instead of the Hawks from Gauteng — something flagged as suspicious by Mngoma.

He said he and Sgt Norton Ndabambi were both members of a special task team that had been created to deal specifically with cases of conspiracy to commit murder.

“During June 2020 the former minister ... laid a complaint under oath that he has reason to believe, and that he had been informed, that there is a conspiracy to kill him. This complaint was directed to the task team to investigate. That is how our unit become involved with it [sic],” he said.

Later, when other “alleged offences were also committed” involving Gigaba “that may have a link or a reference to the charge of conspiracy to commit murder which the task team was already busy investigating, like the offences of malicious damage to property and crimen injuria ... it was logical that our task team decided to investigate these offences as well ... to establish whether there was any link to the complaint of the conspiracy to commit murder,” said Mavuso.

“These other crimes were then duly investigated and the dockets were presented to the National Prosecuting Authority to consider prosecution and enrolment of the charges, and a decision was taken to prosecute and arrest the applicant, as everyone is equal before the law,” said Mavuso.

He said there was no unlawful conduct by the Hawks: Mngoma volunteered all her devices and PIN numbers. “The applicant did not complain about the handing over [of] her electronic devices, nor did she indicate that she may require the notebook for studying purposes. We undertook to download the contents and return said electronic devices to the applicant once that has been done.”

In fact it was subsequently established that it was Mngoma who had deleted “the incriminating WhatsApp message as well as other content, which were sent to Mr Siyaya,” said Mavuso.

He also denied not allowing her to contact a lawyer, saying she chose not to speak to an attorney and instead used her own phone to call her mother. “The cell records will confirm our version,” said Mavuso.

The Hawks and NPA also said that Mngoma’s application was not urgent and should be dismissed in any event because, in law, an application cannot be brought in a civil court for a declaratory order that will affect ongoing criminal proceedings.

In her affidavit filed last week, Mngona said it was “perfectly lawful to allude to the risk of HIV/Aids in the context of people being accused of sleeping around” and her message had never said Siyaya was HIV-positive. “Even if it did, it is not a crime to say a person is HIV-positive,” she said.

I snapped and took a vegetable slicer and scratched the car.

On the malicious injury to property charge, Mngoma said that the “confession” she gave the Hawks was illegally obtained because she was not informed of her rights, including her right to a lawyer.

In the “confession” statement she made to the police, she said: “I and Malusi Gigaba had differences and I have been harbouring anger against him and eventually because I believe he has extramarital affairs. On [the] 20th at around ... 8pm I snapped and took a vegetable slicer and scratched the car.”

Mngoma said not only was this statement illegally obtained but there was no offence disclosed: “On the contrary, it points to extreme provocation and involuntary conduct traceable to the type of abuse many women face in our country at the hands of their spouses, who are serial philanderers. In short, the statement itself discloses a valid defence in law. It is accordingly essentially exculpatory.”

However, Mthimunye said the minimum threshold requirements to decide to prosecute are “there must be evidence under oath or affirmation that establishes the elements of an offence and links the identified suspect to it” and “that when it is presented to a court ... there is a reasonable prospect of a successful prosecution”.

In this matter, these requirements were present, he said.

Norma Mngoma’s arrest was an “orchestrated scheme” to bully her and “delete specific information” from her electronic devices‚ said the wife of ...
News
1 year ago

The farming community of Normandien, near Newcastle in northern KwaZulu-Natal, raised concerns about farm murders with police minister Bheki Cele on ...
News
1 year ago
Next Article