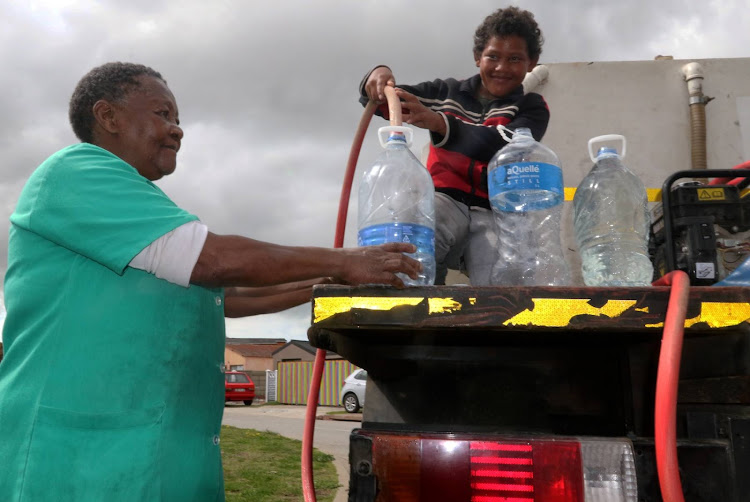 Nathan Williams pours water into a 5l bottle for Mavis Marico in Malabar, which has been without a steady supply of water since August 27.
Image: FREDLIN ADRIAAN

That is how residents and business owners feel as large parts of Nelson Mandela Bay continue to struggle without water after almost a week.

The seething residents are now questioning if the water outages and constant load-shedding are the “new normal”.

After a week of intermittent water supply to the city’s western and northern areas, residents received some relief on Monday morning — but only briefly.

The Metro has been struggling with water shortages since Tuesday last week as a result of a burst pipe at the Nooitgedacht water scheme.

Nooitgedacht then experienced electricity faults on Friday, Sunday and Monday.

Subsequent power outages at stations such as one in Motherwell further delayed the steady supply of water.

Shiraz Afzal, who owns Afzal’s Unisex Hair Salon at the Linton Arcade Centre, said he had to cut back on the number of customers.

“I have had to turn people away since Thursday,” he said, adding that only people who needed a cut or trim could be assisted.

He has resorted to buying bottled water for his shop.

“I am essentially losing money.”

Lavender Laundromat manager Sindy Siyotywa said they had been forced to turn customers away on Monday.

The laundromat is also at the Linton Arcade Centre.

“I have had to turn away more than five customers,” Siyotywa said.

“It is completely unacceptable that the business community and residents of Nelson Mandela Bay have been placed in this situation,” she said.

“The city mothers and fathers in the municipal council should hang their heads in shame for their failure to provide oversight and leadership in this regard.

“It is disingenuous and irrational to encourage paying customers — businesses as well as households — to continue to reduce consumption when the excessive volume of water lost to leaks is still not declining at a significant rate.”

Mona said repeated offers from the chamber’s members to assist with leak repairs and expertise remained on the table.

“This water crisis only adds to the obstacles that local businesses must now face, which include surviving an economic recession, a national lockdown and load-shedding.”

After days of intermittent water supply to the city’s western and northern areas, Nelson Mandela Bay residents received some relief on Monday ...
News
1 year ago

On Monday morning, minutes after the municipality issued a notice saying that the water supply system from Nooitgedacht had recovered, resulting in the reticulated system being filled, a second notice was sent saying the supply had been stopped.

“The water and sanitation department has just been informed of another electricity outage at Nooitgedacht and all water treatment had to be stopped,” it said.

The water supply was restored to some parts of the Metro by lunchtime, but others will take longer as the reservoirs slowly fill up.

Before the power failure on Monday, the Chelsea reservoir was at 13%. However, the level quickly dropped to 9% after the morning demand.

According to the municipal statement, the intermittent water supply will continue for the next few days as the system recovers.

Infrastructure and engineering political boss Mongameli Bobani said the water outages were beyond the municipality’s control.

“This is not a man-made issue,” Bobani said.

“People have been affected in several areas, including those not supplied by Nooitgedacht as the reservoirs are dropping fast.”

The Nelson Mandela Bay’s catchment dams were at a combined 18.91% on Monday.