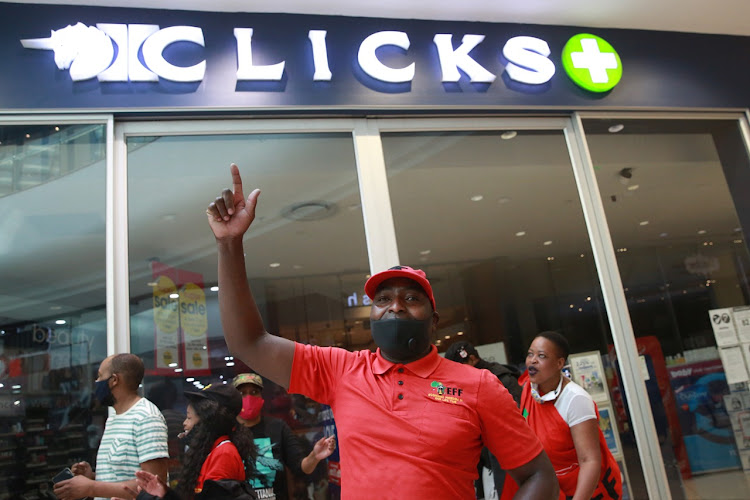 Clicks has come under fire from the EFF and many other South Africans over a 'racist' advert for hair products.
Image: Picture Thapelo Morebudi/The Sunday Times

Health and beauty retailer Clicks has announced that it has cut ties with hair brand TRESemmé after racism storm over advertisement pictures depicting black hair as "dry and damaged".

The adverts posted on Clicks website by TRESemmé last week have sparked public outrage and protests at the retailer's stores led by  the EFF since Monday.

“Clicks will be de-listing and removing all TRESemmé products from shelf with immediate effect and will be replacing the gap with locally sourced haircare brands, of which Clicks has an extensive range already. Furthermore, Clicks will be engaging with all suppliers to enforce their ethical code of conduct,” read a statement from Clicks CEO Vikesh Ramsunder.

The company said they will be working with Government to help grow the local beauty market.

Ramsunder said the senior executive responsible for the racist advert has resigned and the employees involved in the placement of the ad will be facing disciplinary action.

Meanwhile, Clicks has successfully attained a court order stopping the EFF from disrupting operations in its outlets countrywide.

Clicks has attained an order preventing the EFF and its members from disrupting its operations.
News
1 year ago

The EFF has threatened to shut down Clicks stores on Monday if the company does not do so itself.
News
1 year ago
Next Article