Insight into failed 'petrol bomb attack' on Clicks in Emalahleni 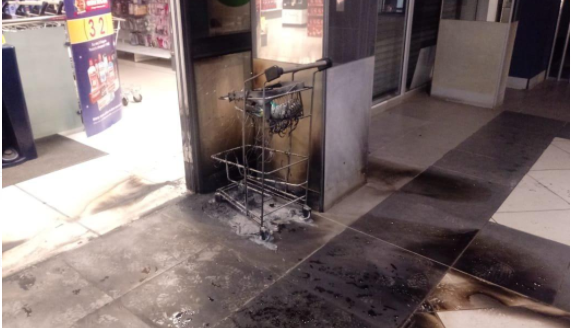 The Clicks at Saveways Crescent Centre in Witbank came under attack on Monday morning.
Image: Supplied

SowetanLIVE's sister publication TimesLIVE has reliably learnt that a group of men driving two vehicles had descended on the Clicks at Saveways Cresent Centre in Emalahleni [Witbank] and petrol-bombed it in the early hours of Monday morning.

“It was at about 1am when men in an Avanza and an Audi arrived at the centre. Security guards approached them and asked them to leave the premises as the mall was closed. The group drove off but then they returned on foot. They had the petrol bomb with them,” the source told TimesLIVE.

The bomb was allegedly thrown into the shop. The flames were put out by the security guards shortly thereafter.

Just a trolley and the glass doors of the establishment, which had been blackened by smoke, were damaged.

The attack on this and other Clicks outlets came as EFF leader Julius Malema called on his members to “attack” after a hair advertisement where African hair was referred to as dry and damaged, while an example of white hair was described as fine and flat, then restored to glossiness after use of the hair product.

He told TimesLIVE that party members had nothing to do with the fire at Saveways.

“It’s not the EFF at all,” he said. “We went there but we found that it has been burnt. We don’t know what happened. Did you ask them? Maybe it was an electric fault. We don’t know,” he said.

He was speaking shortly after he and EFF supporters had barged into the Highveld Mall.

The EFF's Collen Sedibe spoke to @TimesLIVE earlier this morning where he maintained that their members had nothing to do with the petrol bomb which struck at the Clicks Saveways Cresent Centre earlier on Monday morning. pic.twitter.com/NvY9ecmfl7

Police were yet to confirm whether the EFF had any involvement in the incident.

At the Highveld Mall, some of the protesters had stopped to get their hands sanitised by the security guard manning the door while others stormed in, ignoring signs that they were barred from entering without a mask.

The group later returned to where the botched petrol bomb attempt had earlier occurred. They sang struggle songs before chaining the already locked doors shut. The shop has been closed since.

The EFF was earlier at the Clicks at Saveways Crescent Center in Witbank which caught alight earlier this morning, allegedly from a petrol bomb. The fire was said to have caused minimal damage. The EFFs Collen Sedibe has maintained they were NOT behind this attack. @TimesLIVE pic.twitter.com/fEDpFDBWOc

The group of protesters moved to several Clicks outlets around the town on Monday as police moved with them from location to location.

At one of the outlets, at Ben Fleur Boulevard, the protesters in red banged on the glass door, shattering it as they demanded that staff who were inside stop working.

The Clicks employees had closed and locked the glass doors, but were visible inside.

Police and EFF members had a stand-off as police tried to quell the situation.

Sedibe eventually entered the shop along with police and after some discussions with shop management, the staff left the premises, some of them clutching their handbags.

Staff at the Clicks in Benfleur have since left the premises following the calls by the EFF for them to come out. The group of staff who were advised to come to work in plain clothing are now standing a few meters from the shop. @TimesLIVE pic.twitter.com/ujXOMgBuLF

As the staff stood next to the shop, alleged EFF supporters issued them a warning. “We have people all around so if you go back, something bad will happen. Mark my words,” said one woman to a Clicks staffer.

Others rushed to the nearby toilet where they took refuge from the crowd.

“Imagine if they force us to go along with them,” a Clicks worker said as they headed to the toilet.

Another employee said: “We are also EFF. We stand with them but we have to come to work.”

Protest action in Emalahleni had occurred with no intimidation of shoppers and other outlets as shop owners briefly closed their doors when the protest action occurred.

Most of the staff members at Clicks shops had arrived at work in civilian clothing. At Highveld Mall, which was shut on Monday, the workers, also clad in their own clothes, had used a back entrance to make their way in.

Sedibe said their protest action was peaceful. “It’s peaceful because they have closed. They have complied with our demands that they must close and if they open, they will see wonders,” he said.

The damage of Clicks stores in Witbank...One was petrol bombed and another had its glass shattered by protestors. @TimesLIVE pic.twitter.com/GM6e003sgK

While the advert that caused the offence had been published on Clicks' website, the company sought to clarify that it was in fact an advert by hair care company TRESemme which operates under Unilever.

Sedibe said Clicks, however, would feel their full wrath.

“We call on Clicks to cancel their contract and they don’t want to do that. As long as they have not cancelled their contract, we will continue with the protest,” he said.

Besides cancelling their contract with Clicks, EFF wants Clicks to disclose the names of the people who were behind the campaign and those who had also published it on the website.

Clicks, however, said it was bound by data privacy laws and could not oblige. It also said the EFF had no legal standing to demand this.