Image: File EFF leader Julius Malema said his party's followers should shut down Clicks stores countrywide on Monday if the company does not do so itself.

The EFF issued a strongly-worded two sentence statement in reply to a four-page letter from lawyers for the retail outlet Clicks, in which they called for the party to desist from its plans to shut down the company's stores.

“Your racist lawyers of Pravin Jamnandas Gordhan and your racist client, Clicks, can go to the nearest hell. Black dignity or death, we shall overcome,” read Sunday's response from the EFF. 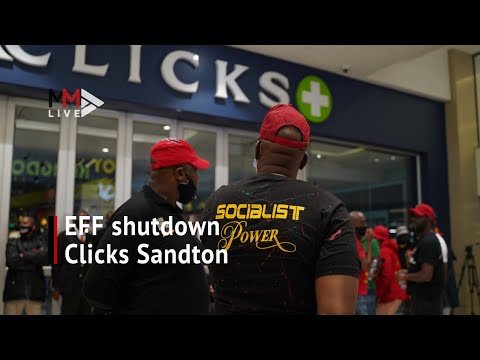 Werkmans Attorneys, which represent Clicks in the matter, has previously represented public enterprises minister Gordhan in his legal battles.

The lawyers had penned a letter to the EFF in which they explained how Clicks found itself embroiled in a hair scandal.

Last week, the company had run an advert on its website with an image of African hair, which was labelled as dry and damaged, while an example of white hair was described as fine and flat.

The EFF has received the following lawyers letter from the lawyers of the racist @Clicks_SA pic.twitter.com/CJSA2ZFybK

Clicks has since taken down the advert and apologised, saying there was an oversight in publishing it.

The retail giant said it had done a lot to promote products which cater for black hair.

The company said the ad was not its own. It said the advert was commissioned by the hair company TRESemmé.

“TRESemmé, a brand with which our client has partnered and is a distributor of its products, published an advertisement on our client’s website which depicted the hair of a black woman as being ‘dry, damaged, frizzy and dull’ against that of a white woman, which is described as ‘colour-treated, fine, flat and normal hair'.

The apology on the Unilever website read: “We are very sorry that images used in a TRESemmé SA marketing campaign on the Clicks website promote racist stereotypes about hair. The campaign set out to celebrate the beauty of all hair types and the range of solutions that TRESemmé offers, but we got it wrong. The images are not in line with the values of our brand, or of Clicks. TRESemmé SA apologises for the offence these images have caused. We also apologise to the Clicks group.”

Among the EFF's demands of Clicks was for it to publish the names of the senior management who signed off the advert, and that the independent contractors who were behind the advert be fired.

It had given the company 24 hours to act.

Clicks, however, replied that it did not have the power to do this as it was bound by data privacy laws.

“Moreover there is no legal basis on which your organisation can request the names of those employees,” it said.

It had requested a conference call with the EFF to discuss the matter, and said it was investigating the incident.