Seeping effluent dams up against houses in Port Elizabeth 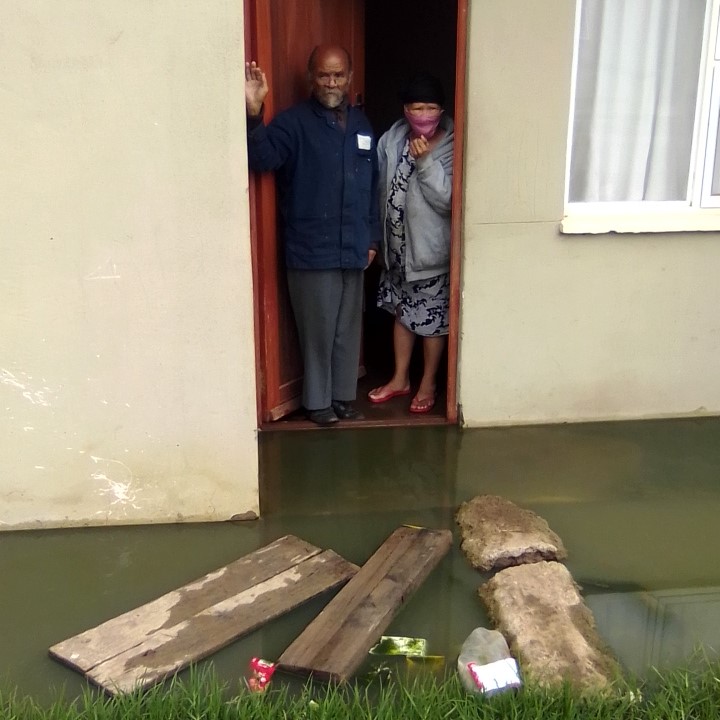 WE’RE STYMIED: William Lervler and his wife Caroline, both 69, battle to step out of their home as they risk falling into sewage
Image: Supplied

Residents of Booysen Park in Port Elizabeth have had to place rocks and planks outside their front doors to hop, skip and leap over the sewage which has seeped into their gardens and right up to the front door.

And while the municipality has since unblocked the drain which was causing the sewage spills, nothing has been done to remove the subsequent effluent which has dammed around at least 10 houses in the area.

“We were never told what is the problem with the sewerage infrastructure that causes it to continuously spill. Qunu is dirty and we tried to engage with the municipality,” Songwiqi said.

A woman who asked not to be named said they had been relocated in 2013 and had been suffering with sewage problems ever since.

Brenda Smith from Booysen Park in Qunu says her she started getting a running stomach after smelling the sewage water that wasn't cleaned by the Nelson Mandela Bay Municipality and her seven-year-old son started vomiting after playing in the water. 📹 @sonic303 pic.twitter.com/8YYlTHVo6q

She said though the municipality had unblocked the municipal drain on Thursday, it would be blocked again by the end of the month if past experience was anything to go by.

She added she feared for the health of her three children.

Another resident, Brenda Smith, said her seven-year-old son had fallen ill after playing in the sewage.

Morina Monique Alexander 29 who's lived in Qunu since 2013 explained how their living conditions affected her community. 📹 @sonic303 pic.twitter.com/DoK7BipENa

“He started to vomit, he couldn’t eat, my child was right at these spillages. The doctor said the water is contaminated.”

Morina Monique Alexander showed The Herald reporter how they had to cross the sewage puddles while leading us to a home where there was a five-month-old baby. 📹 @sonic303 pic.twitter.com/LkPYccJXY0

William Lervler and his wife Caroline said they feared if they got Covid-19 they wouldn’t survive as they had no access to clean water.

Morina Monique Alexander asked William Iervler 69 Caroline Iervler 69 to explain how they have to clean the sewage spillages every day in order to be able to leave their home. 📹 @sonic303 pic.twitter.com/ms6nq9B6mU

Morina Alexander said they couldn’t eat with the smell worsening at night.

Songwiqi said the municipality needed to come to Qunu to explain how it had fixed the blockage and yet failed to clean the sewage problem.

Failing to do so would see residents protest about the lack of service delivery on September 9, he said.

Municipal spokesperson Mamela Ndamase said: “We have noted the query, our officials will follow up on it.”