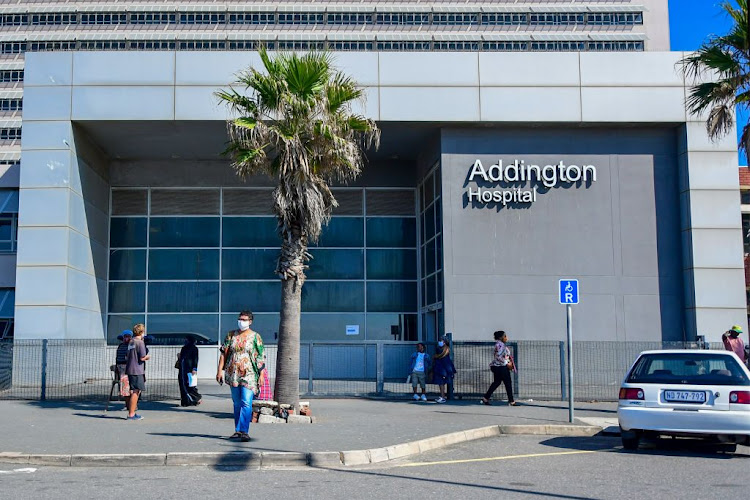 The KwaZulu-Natal health department is considering moving the Addington Hospital from Durban's beachfront because the "salt air that comes from the ocean affects the lifts".
Image: Gallo Images/Darren Stewart

Health MEC Nomagugu Simelane-Zulu told a recent parliamentary session that the issue of malfunctioning lifts at the beachfront facility was an ongoing problem “primarily because of the location of the hospital”.

Simelane-Zulu, it is understood, was responding to questions about the hospital's faulty lifts, which have resulted in patients sometimes having to climb the stairs of the high-rise building.

“Addington Hospital is located just opposite the sea, on the beachfront. It's in an area which has a lot of hotels.

“The building itself is quite high. The salt air that comes from the ocean affects our lifts continuously.

“The rust that is always there is what has been affecting our lifts. As a result, we are currently looking at options of moving the hospital away from where it is and building a structure that will be manageable and friendly to patients,” she said.

Residents, holidaymakers and hotel staff prayed, sang hymns and openly wept as a lifeguard tried in vain to resuscitate a five-year-old boy, who had ...
News
1 year ago

Ntokozo Maphisa, the department's spokesperson, said in a statement: “As part of fiscal responsibility, the department is always looking for opportunities to optimise the usage of its financial, human, and material resources in order to make much-needed savings and ensure best practice.

“By virtue of Addington Hospital’s age, location along the coastline, and large catchment area, the facility’s health technology equipment and other crucial infrastructure are vulnerable to constant malfunctioning.”

Maphisa said the department has spent “millions of rand each year on repairing or replacing this infrastructure”.

“When taking decisions regarding the future of any health-care facility, the department conducts due diligence, which includes wide engagement with all affected stakeholders.

“In keeping with the principle of inclusivity, the department has begun a consultative process and, at the right time, will provide further details about the unfolding of the process,” he said.

Mandla Shabangu, spokesperson for the Democratic Nurses Organisation of SA (Denosa), told TimesLIVE on Saturday that the union “was shocked to hear that comment from the MEC”.

“It is procedure that when such movement is to take place, as stakeholders, we should be thoroughly consulted because such a move will inconvenience our members working there and the public.

“We do not agree that the problems of Addington infrastructure including the lifts is the result of the sea ... ”

Shabangu accused the department's infrastructure section and as well as the public works department of failing “dismally over the past 10 years to maintain the infrastructure”.

“The problems of that hospital are more than the non-functioning lifts. There's poor maintenance of staff residence, broken windows, lack of working electricity, blocked sinks and toilets. So we cannot only say it's the issue of its location.

“We are waiting for the employer to formally present their intention to us as stakeholders at the relevant platform, where we will then engage on their plan from there,” he said.

Police are probing how a nurse who was among a group of health-care workers tested for the coronavirus died in a toilet at Addington hospital.
News
2 years ago
Next Article