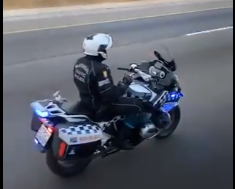 A traffic officer on a motorcycle who let go of his handlebars and appeared to be grooving to music while on the job is facing a disciplinary hearing after being caught on camera.
Image: Screengrab / RTMC

A national traffic officer caught on camera letting go of the handlebars of his motorcycle, stretching his arms and then seemingly jamming to a tune while on the move has revved up his bosses for failing to set a good example to Gauteng motorists.

The bopping officer was filmed with blue lights flashing, cruising past a vehicle in what irked traffic authorities said showed a “lack of discipline”.

The video, which has gone viral on social media, was however altered to include the famous Zol soundtrack featuring vocals by Cogta minister Nkosazana Dlamini-Zuma.

The person who posted the video seemingly wanted to highlight the carefree nature of South Africans, and added a banner with the words “I love this country” to the video.

#BREAKING: Immediate DISCIPLINARY action is being taken against our National Traffic Police member. Lack of discipline will not be tolerated. Traffic Officers are expected to set a good example to other road users and not flout regulations. pic.twitter.com/s7WVS34BQl

While the incident at first glance appeared to be relatively harmless, the Road Traffic Management Corporation (RTMC) did not share the officer's joy and vowed to hold a disciplinary hearing.

“Immediate disciplinary action is being taken against our national traffic police member. Lack of discipline will not be tolerated. Traffic officers are expected to set a good example to other road users and not flout regulations,” the corporation said in a tweet.

TimesLIVE reached out to the RTMC to find out more.

“He will most probably face charges of bringing the organisation into disrepute,” said RTMC spokesperson Simon Zwane.

He said they had spotted the video via social media earlier this week and had since traced the errant officer.

Some commentators on social media, responding to the RTMC post, urged the corporation to “lighten up”.

Deceased Tshwane metro officer was dedicated to his job

One of the three officers of the Tshwane Metro Police Department who died over the weekend has been described as a man who was committed to his work ...
News
1 year ago
Next Article