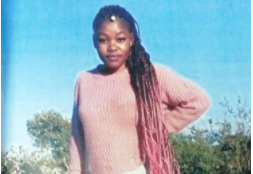 Kgaogelo Shai has not been seen since the weekend while her boyfriend was found dead on Monday.
Image: Supplied / SAPS

Limpopo police are searching for two people who have gone missing under suspicious circumstances over the last few days.

One is a 20-year-old woman who has not been seen since Saturday, August 29. Her boyfriend was found dead on Monday.

She was living  on a rented property at Mokgoloboto village.

“Shai was last seen with her new boyfriend Ronny Kgatla from the same village. He reportedly committed suicide on August 31 2020,” said Ngoepe.

Police have since been searching for her but have no leads.

The grade 7 pupil has been missing since he got into trouble at school on Monday.

Murders highlight how Mzansi is failing women and children

Not all the families have found closure.
News
3 years ago

Ngoepe said the 14-year-old was involved in a fight at school.

“The school management instructed him to go home and return with his parents. It is alleged his parents were not available and since then he never came to school or returned home,” said Ngoepe.

His school bag was later found dumped next to the R574 road which runs next to the boy's village, Sindile.

His concerned mother then opened a missing person’s case after failing to locate him at his relatives and friends.

“Anyone with information that can assist the police to find the two missing persons, may contact Det-Sgt Lawrence Shikwambana on 0723737399, Lt-Col Makasela Henry Mushwana on 0824517156 or Warrant Officer Madihlaba on 0728436592.

“Alternatively, they can contact crime stop number on 0860010111 or the nearest police station,” Ngoepe added.

Senzeni na? The only question ringing in my head as we are forced to navigate another wave of violence meted out on women by men in this country.
Opinion
1 year ago