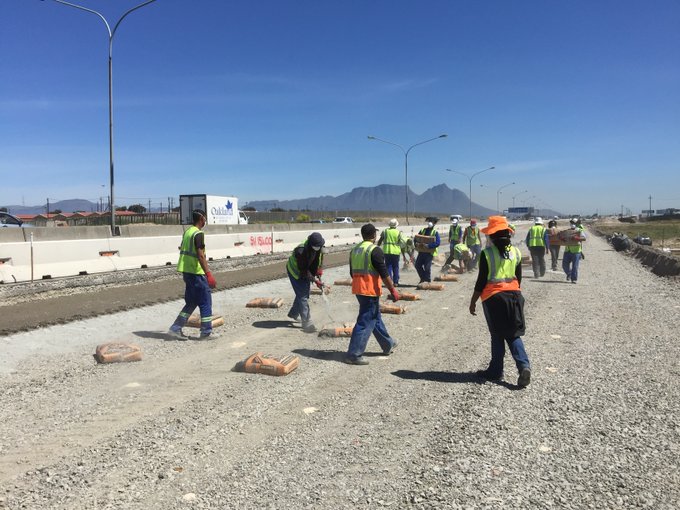 Workers prepare recycled concrete to be mixed into the new road.
Image: Greencape

Chunks of old highway have been repurposed to upgrade a stretch of the N2 near Cape Town International Airport.

Instead of hauling the huge amounts of rubble off to the landfill, the province, along with the City of Cape Town and the contractors, decided to crush the waste and aggregate it back into the highway.

A study by Greencape found that R3.1m was saved, excluding the costs that would have been incurred during the landfill process once the rubble arrived there.

The contractors would have saved even more, Greencape found, had they been able to stick to their original plan to crush the material on site, a process prohibited because of the proximity to Cape Town's airport.

“If crushing had been done on site as originally envisaged, the project would have realised a 36% cost saving relative to the virgin material,” read the report shared by Greencape this week.

Unfortunately, due to an unexpected change in the crusher site from the road reserve to a crushing site in Philippi, the incorporation of the recycled material was 20% more expensive than if virgin commercial sources had been used.

“A further complication was the difficulty in accessing the lanes furthest away from the crushing site, which added significantly to haulage,” read the case study.

Township parents build their own speed bumps to slow traffic

Parents in Nkandla township in Port Elizabeth have built their own speed bumps to slow traffic to protect their children.
News
1 year ago

A group of KwaZulu-Natal artists together with event managers, entertainment venue owners, stage and sound people brought the N3 highway to ...
Entertainment
1 year ago
Next Article