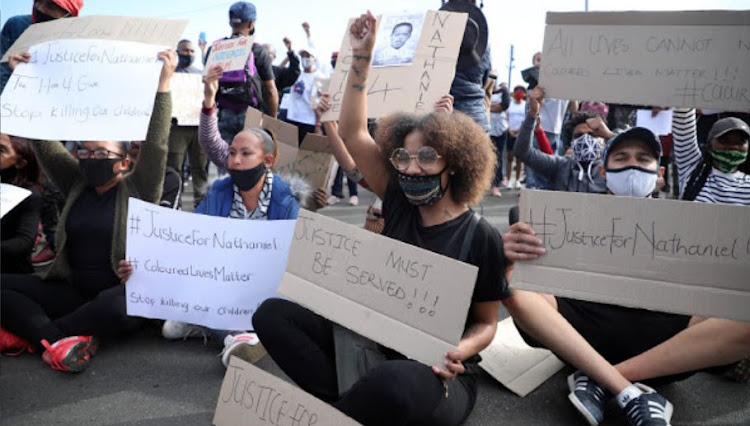 AUGUST 30 2020: Eldorado Park residents protest against the killing of Nateniel Julies, 16, a child who was killed allegedly by the police, in Eldorado Park.
Image: ANTONIO MUCHAVE

The mother of Eldorado Park teenager Nateniel Julies, who was shot and killed, allegedly by police officers, has expressed renewed hope that the arrest of two police officers will lead to justice being served.

Julies's mother, Bridget Harris, said she wasn't sure if the two cops are the "real culprits", however.

"The two who were arrested must start speaking [and reveal] who the real culprit who shot Nateniel is," Harris said during a march by the community to the Eldorado Park police station yesterday. She said they did not know the detained officers.

Clint Smith, Nateniel's stepfather, read a memorandum compiled by the family and the community in the south of Johannesburg.

"We want weekly updates on the case from Ipid [Independent Police Investigative Directorate] and also provide updates to the families of those victims who were subjected to police brutality. We want police officers from Eldorado Park to undergo drugs tests so trust can be restored," Smith said.

He also said that they demanded that the National Prosecuting Authority finalise Julies's matter within six months.  Eldorado Park residents have demanded justice for the teen.

The two officers, who are attached to the Eldorado Park Crime Prevention Unit, are expected to appear in the Protea magistrate’s court today charged with the murder of the 16-year-old. The pair will also be charged with possession of prohibited ammunition and defeating the ends of justice.

Julies, who had Down's syndrome, was shot at close range last week.

Flowers and two white crosses were placed next to a truck at the place where Julies was shot. The scene is less than 100m from his home.

The two police officers who are accused of murdering Nathaniel Julies in Eldorado Park are expected to appear in the Protea magistrate’s court on ...
News
1 year ago

Florence Cotzee, a resident, said their children were not safe as they were constantly harassed by police officers.

“Police are always targeting our teenage children. Whenever they find them standing together as a group they make them stand in a line and search them. They treat them like gangsters or drug dealers,” Cotzee said.

She said Julies was probably subjected to the same treatment, which could have led to the police officers opening the fire on him.

“Lokies [as Nateniel is known in his community] couldn't put four words together for a sentence. They probably spoke to him and he didn't respond before they shot him,” she said.

Another resident, Simone Page, who  saw Julies's body being thrown into the back of a police van shortly after he was shot, refuted the notion that the teen was caught in the crossfire between police officers and a gang in the area.

“It was a quiet night. I was watching TV and I saw blue lights reflecting on my window. Then I heard a loud bang and ran to see what was happening. I saw two cops coming from the side of the truck. One of them was carrying Lokies, but I didn't know it was him because it was dark,” she said.

“Then they threw his body in the back of the van and sped off. Lokies's father came out after the shooting and was looking for him and that’s when we discovered he was shot."