'They are men of honour,' speakers say of three metro police officers killed in crash 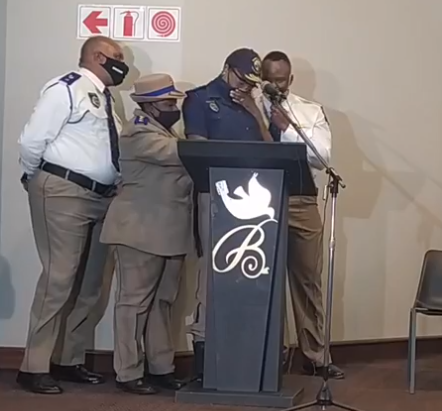 The head of TMPD, Lieutenant-General Johanna Nkomo, was overcome with grief at the memorial service of the three officers who died at the weekend.
Image: Screengrab

“They died with their boots on and, therefore, they are men of honour.”

These were some of the encouraging words offered to the families of the three Tshwane Metro Police Department (JMPD) officers who were killed when their vehicle was rammed into head-on by an alleged drunken driver who was fleeing another group of officers at the weekend.

The first officers to pursue the vehicle had called for backup and were joined in the chase by three officers in a TMPD vehicle, before the fatal collision.

The trio were afforded a scripture-filled memorial service at the police department's headquarters on Wednesday.

During the service, the families of the three officers - Edward Phaduli, 37, Khathutshelo Mukwevho, 29, and Silas Phala, 43 - would periodically remove their masks to wipe away tears that streamed from their faces.

Deceased Tshwane metro officer was dedicated to his job

One of the three officers of the Tshwane Metro Police Department who died over the weekend has been described as a man who was committed to his work ...
News
1 year ago

Police minister Bheki Cele, who supported the suspension of alcohol sales during the  lockdown, expressed anger on Monday at the death of Tshwane ...
News
1 year ago

Among those overcome with grief was the TMPD chief, Lt-Gen Johanna Nkomo.

She took a long breather as she battled to get through her address to the families and colleagues of the deceased officers.

“To lose three of your children at a go hurts, it really hurts ... Today I am battling to speak because the loss is too much,” Nkomo said.

She said this incident was never meant to have happened. Elaborating on this, she said the words widow or widower were given for women and men who lost their spouses. She said orphans referred to the name of parentless children, but there was no name given to a parent who had lost a child.

“That is because, in the order of God, that is not supposed to happen,” she said.

Echoing the words of the chaplain who had earlier taken to the podium, Nkomo urged the families to call upon and find solace in God.

One by one, family representatives of the three officers ascended to the stage to deliver the funeral details.

“I trained the three colleagues. One of them was my brother,” he said, referring to Mukhwevho.

He turned to the speakers and the TMPD choir that had delivered hymns through the service.

“As families we are meant to be comforted but our minds, our hearts and our bodies can’t take it any more because we despair. It is very difficult,” he confessed, trying to hold back the tears.

“To the choir, we ought to be listening to your songs but our ears can’t hear anything. We are trying to understand what people are saying to us ... we are trying to translate all the messages that are being offered to us,” he added.

Earlier, TMPD spokesperson Isaac Mahamba had given an update on the sole survivor of the crash that claimed the three officers' lives.

The woman was a passenger in the vehicle which was being tailed by police for erratic driving at 2am on Sunday.

“I am told the lady has been discharged and is doing well at home. But again, what I have heard is that she is traumatised about what happened here,” said Mahamba.

He was being interviewed on eNCA before the memorial service.

Empty and unopened beer bottles were allegedly found in the vehicle of the suspect fleeing police after the crash. “There was an exhibit that showed that there were drugs in the vehicle,” Mahamba added.

Police are investigating a case of culpable homicide.