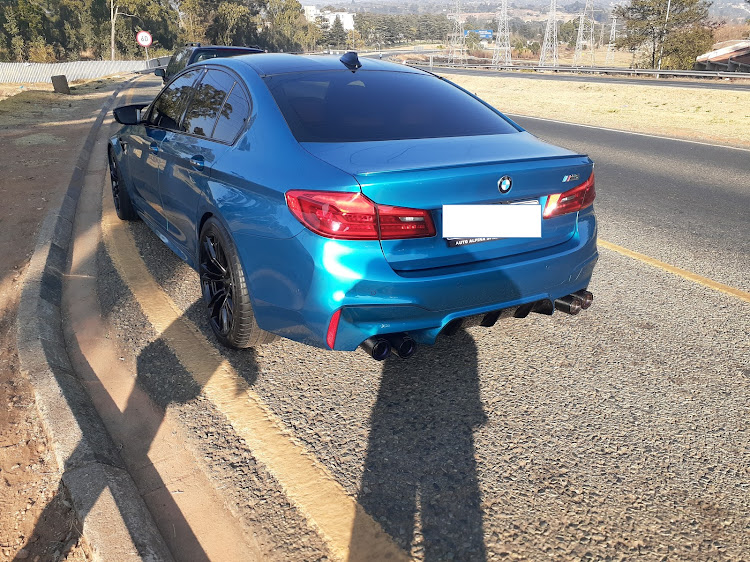 A man caught speeding in his BMW M5 claimed he was taking a friend to hospital after he “noticed symptoms of Covid-19”.
Image: EMPD

A 47-year-old man was arrested after he was caught driving 204km/h on the N3 freeway on Sunday, Ekurhuleni metro police (EMPD) said.

EMPD spokesman Kobeli Mokheseng said the man driving a BMW M5 claimed  he was taking his friend to hospital after he “noticed symptoms of Covid-19”.

“The driver was taken to the Bedfordview police station. A passenger, who was interviewed by officers on site, denied being infected.”

On Saturday, a 34-year-old man was arrested on the N12 freeway  after he clocked 168km/h in his Volkswagen GTI.

The man, who was traveling with his nine-year-old son, claimed he was rushing to fetch a cake for his son’s birthday, Mokheseng said.

In a separate incident on the same freeway, a 23-year-old woman was arrested after she hit 174km/h in her BMW 1-series vehicle.  Mokheseng said she claimed she was late for a dentist appointment.

The three speeders were charged with reckless and negligent driving and are expected to appear in the Palm Ridge and Germiston magistrate’s courts soon.

A 50-year-old man was arrested for allegedly exceeding 200km/h on the N1 in Limpopo, the provincial transport department said.
News
1 year ago
Next Article