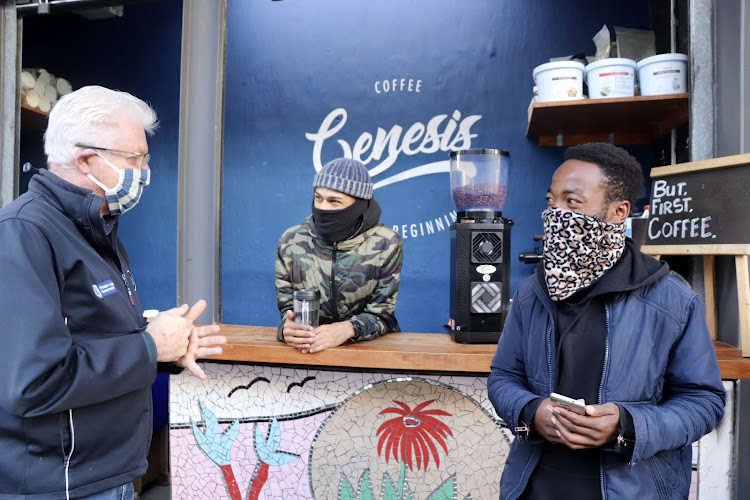 Western Cape premier Alan Winde visited Cape Town coffee shops on Tuesday to see how they were recovering in level 2 of the lockdown.
Image: Twitter/Alan Winde

“We have a very difficult path ahead of us,” said Winde, a keynote speaker during a Western Cape property development webinar.

The premier, who recently recovered from Covid-19, was outlining the economic challenge in the wake of multiple shocks over the past few years, including load-shedding, drought, and international ratings agency junk status.

“We had a meeting with our bankers this morning, getting an overview with their economics team and our economics team. Quite frankly, right now as a country we are borrowing R2bn every day — not on Saturdays and Sundays as yet,” said Winde.

“Yesterday we passed the R3-trillion debt mark. We find ourselves in very difficult times but there is nothing like a good challenge,” said Winde, who noted that SA had a habit of pulling back from the brink of disaster.

The success of the province’s R5.3bn Covid-19 response was testimony to what could be achieved through partnerships and collaboration between various tiers of government and the private sector, he said.

“It was mind-blowing what we managed to pull together,” he said.

The provincial government would now transfer its focus to economic growth, and it would be important to focus on a limited number of tasks, rather than trying to do too much.

“We were very successful [in dealing with Covid-19] because we focused on one thing and everybody focused on it,” he said, pointing to the example of four new field hospitals, including the 862-bed facility at Cape Town International Convention Centre.

Winde said the province would do whatever was necessary to tackle unemployment. “If we need to declare a disaster on unemployment to allow things to happen quickly, then we will look at doing it,” he said.

Wednesday’s webinar also featured several senior property developers, who highlighted challenges facing the industry - particularly the backlog at the provincial deeds office, which has closed six times so far during the lockdown. Winde said he hoped the bottleneck would be cleared by early next month.

Last year, finance minister Tito Mboweni warned of the upcoming R3-trillion milestone and said it was expected to rise to R4.5-trillion in the next three years.