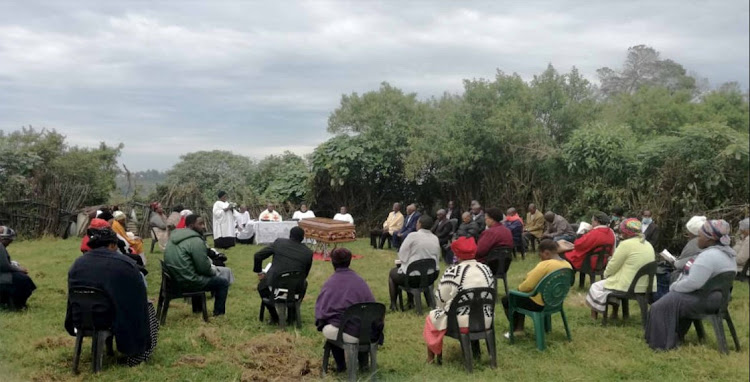 Research by the Walter Sisulu University and the Human Sciences Research Council has found the lockdown rules on conducting funerals caused disruption, anxiety and misunderstandings in the Eastern Cape.
Image: supplied

Lockdown restrictions and regulations on how funerals must be conducted have caused considerable disruption, anxiety and misunderstandings around funeral practices in parts of the Eastern Cape.

That's according to research by Walter Sisulu University and the Human Sciences  Research Council (HSRC).

The research was commissioned by Eastern Cape premier Oscar Mabuyane through the Eastern Cape Socio-Economic Consultative Council after an increase in Covid-19 infections during funerals.

Funeral case studies documented in July revealed that restricted access to viewing and interaction with the corpse was a major source of anxiety.

According to the research, in some cases authorities attempted to shorten funerals to prevent people lingering.

In June, at a funeral in uMhlontlo local municipality, the body arrived from Johannesburg at 4am.

“In the dark, the family welcomed neighbours to view the body. The next day, 50 people attended the funeral, as stipulated under Covid-19 restrictions. Fearing prosecution, they shortened the funeral service to under two hours.

"The mother said only two people spoke at the funeral. She cut it short because she feared  she would go to jail if they broke the law. Later, she regretted the decision because the funeral felt incomplete,” read the report.

During the early stages of the lockdown, when alcohol sales were prohibited, local police raided several funerals to overturn drums of mqomboti (traditional beer). According to the research, the sharing of beer and food was critical to the communal ethos of ubuntu at funerals.

Beer was also needed to reward the gravediggers, whose spades and picks are symbolically washed with traditional beer.

As SA continues counting its dead as Covid-19 spreads through the country, body bags are fast becoming a crucial part in the fight against the ...
News
1 year ago

Another cause of anxiety for mourning families was when the bodies of their loved ones were not allowed to enter the property or home because they felt the deceased could not pass on to the next world under such conditions.

“In Bizana, in the case of a large funeral held in June, the body arrived on the morning of the funeral. The funeral service and rituals took place in a tent [without the body present] and the funeral parlour took the body straight to the grave site, where it was buried before the funeral guests could bid their final farewells. The incident caused considerable anger and anxiety. The attendees said the funeral parlour had no right to do this, but the funeral parlour said it would lose its licence if it broke the law,” read the report.

A family in Cofimvaba faced a predicament because the deceased had shared his last wishes, stating they should slaughter a cow and eight sheep when he died.

"It was far too much food for 50 guests but, not wanting to upset him after death, the family slaughtered the animals because they did not want to bring the family bad luck by disobeying the deceased patriarch," read the report.

Although the study is ongoing, it is evident the funeral regulations are colliding with local cultural sensibilities and historically established practices in the former Transkei.

“This collision is neither inevitable nor insurmountable, but the state and private sector engagement in funerals need to show greater sensitivity to local cultural beliefs in the way the regulations are enforced,” read the report.