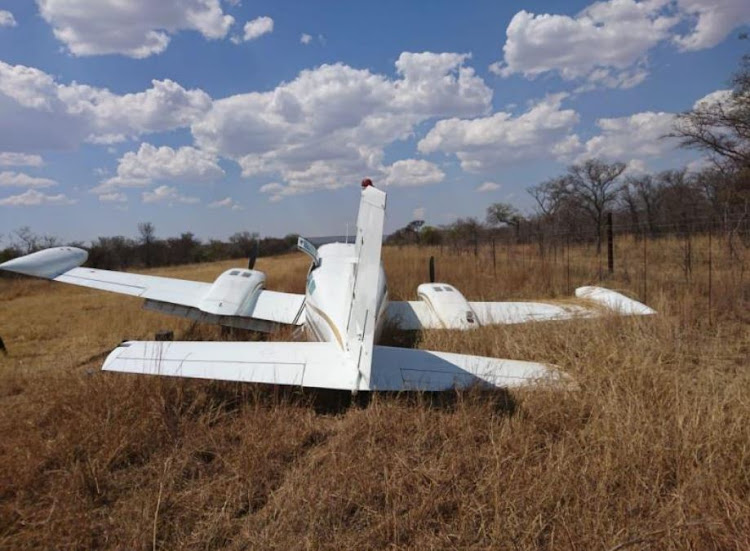 Visitors to a game lodge in Limpopo had a harrowing experience when their pilot got lost and crashed when he landed on the wrong airstrip — and then the helicopter sent to rescue them got lost, too.

This series of unfortunate events played out on October 20, 2019, and is one of three unusual incidents the SA Civil Aviation Authority reported on in a document published on Thursday. The report was compiled by the authority's accident and incidents investigations division.

Apart from the lost pilot, the division also reported on the death of a security guard at a local aerodrome, and how an aircraft was forced to return to OR Tambo because of complications due to a fault reported 14 days earlier.

Here are the details of these cases:

On October 20, 2019 a light aircraft took off at 7.15am from the Rand Aerodrome in Gauteng. On board were the pilot and five passengers. They were destined for Ant’s Nest private airfield in Limpopo.

According to the incident report, the pilot reported that they had flown over the private landing strip twice to inspect the airfield and saw no concerns about the grassy runway.

At 8am the aircraft approached the strip but the landing was bumpy because of an uneven surface. An unseen ditch caused the right-hand side of the main landing gear to collapse, which in turn saw the right-hand side engine propeller and the wing make contact with the ground.

The aircraft veered off to the right and came to rest on the side of the airstrip. Luckily, none of the passengers was injured.

But, it would turn out, the pilot had flown to the wrong airfield. The one he landed on, some 15km away from his intended destination, had not been used in two years.

A helicopter was sent to fetch the clients to take them to the correct airfield, where Ant’s Nest Lodge staff would receive them. Unfortunately, the helicopter pilot then got lost for two hours in the reserve. Ultimately, it had to land at a police station where the guests could be collected.

According to the report, the incident occurred because the light aircraft crew did not properly plan their flight to the destination airfield. 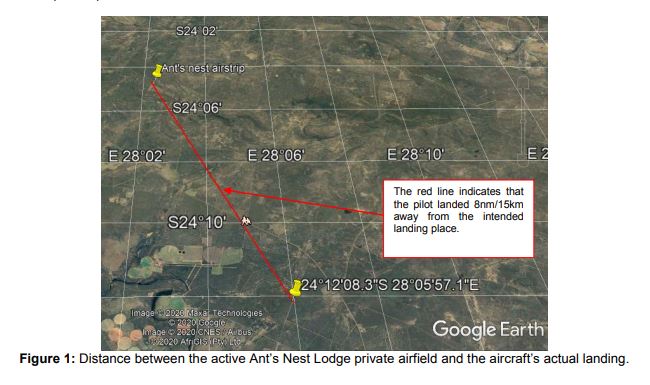 A map showing the distance between where the pilot should have landed, and where he actually did.
Image: Supplied

On December 16, 2019, during the climb phase after take-off at 5.36am from Johannesburg's OR Tambo International Airport to King Shaka International in Durban, the pilots of a Boeing 737-800 noticed an altitude warning in the cabin.

On board the aircraft were two flight crew, four cabin crew and 183 passengers.

The warning alerted the crew that the aircraft’s cabin was not pressurising to the required cabin altitude. The setting was activated while over Mpumalanga.

After notifying air traffic control of the problem, the aircraft descended  to a level where the oxygen in the air was safe to breathe. The plane then returned to Johannesburg, where passengers disembarked safely after 1 hour and 10 minutes.

The cause of the warning was found to be a failure in the air cycle machine, causing a reduction in air inflow from an air conditioning pack. This resulted in the cabin pressurisation system being unable to maintain the required pressure level for a safe environment.

Spokesperson for the CAA Kabelo Ledwaba said pilots were trained for these emergencies and go over all possible emergency scenarios before the plane takes off.

“Everything is done with military precision and all parts of the aircraft are checked before the plane takes off,” he said. 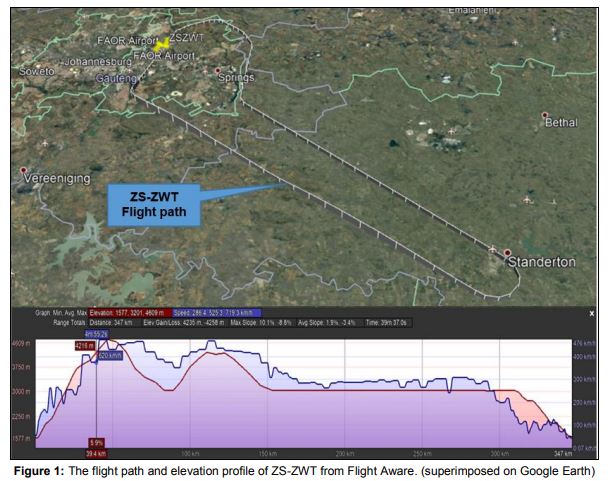 Pilots were forced to return to OR Tambo airport after a fault - which was first reported some two weeks earlier - caused the cabin's air not to be pressurised correctly.
Image: Supplied 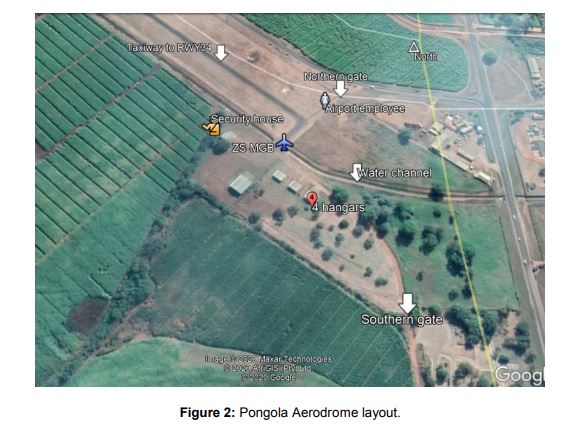 A map showing the Pongola Aerodrome, where a security guard died after walking into a spinning propellor.
Image: Supplied

On July 3, 2019, at 11.45am, a pilot arrived at Pongola Aerodrome to make a private flight to the Rand Aerodrome in Gauteng.

The pilot pulled the light aircraft from the hanger, conducted the preflight checks and then started the engines. He taxied the aircraft towards the beginning of the taxiway, where he stopped to complete the take-off run-up checks.

While he was busy, a security guard approached the aircraft from the right-hand side. But he changed his direction when he saw that the pilot was seated on the left of the aircraft.

He tried to go around the front of the aeroplane to collect landing fees from the pilot but, as he did so, he unknowingly walked into a spinning propeller. The guard succumbed to his injuries before emergency medical services arrived at the scene.

According to the CAA report, the aerodrome was audited by a regulator in September 2018 and had made several adverse findings on its infrastructure. These included that there were no clear markings on the ground, nor boards informing support staff that they must remain clear of the marked areas when an aircraft is present.

A gate to the south side of the aerodrome was permanently open, which posed a danger to people, animals and to the aircraft.

At the time of the accident, the aerodrome operator had still not corrected the findings raised by the regulator.

Ziggy Duwe's responsibilities as a pilot include navigating ships safely in and out of the ports of Ngqura and Port Elizabeth, as well as mastering ...
News
2 years ago

Indian investigators on Sunday began examining the black box of a Boeing-737 that overshot a runway on its second attempt, killing 18 people in the ...
News
2 years ago
Next Article