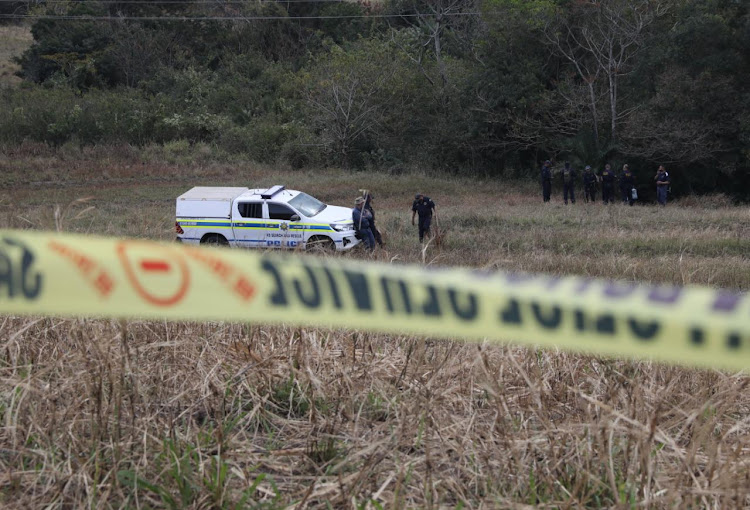 Police comb through a sugar cane field in KwaZulu-Natal where the body of a fifth woman was found. Two people were arrested on Friday.
Image: Sandile Ndlovu

Two people have been arrested in connection with the discovery of five women's bodies abandoned in sugar cane fields on the KwaZulu-Natal south coast.

A police source close to the investigation confirmed the arrests after a fifth body of an unidentified woman in her twenties was discovered in a bush on a sugar cane farm in Mtwalume on Wednesday.

The discovery came after the body of Zama Chiliza, who disappeared on July 6, was found on Tuesday by women gathering wood.

The bodies of neighbours Akhona Gumede and Nosipho Gumede and that of Nelisiwe Dube were found in sugar cane fields in April and July respectively.

Community policing forum chair Lucky Bhuyeni told TimesLIVE that two men were arrested on Thursday evening and Friday morning but he could not give further details.

A concerned sugarcane farm owner on KwaZulu-Natal's south coast is offering a R20,000 reward to anyone with concrete information about the murders of ...
News
1 year ago

The semi-rural community of Mnafu in Mtwalume, on KwaZulu-Natal’s south coast, has again been left reeling after the decomposing body of a fourth ...
News
1 year ago
Next Article