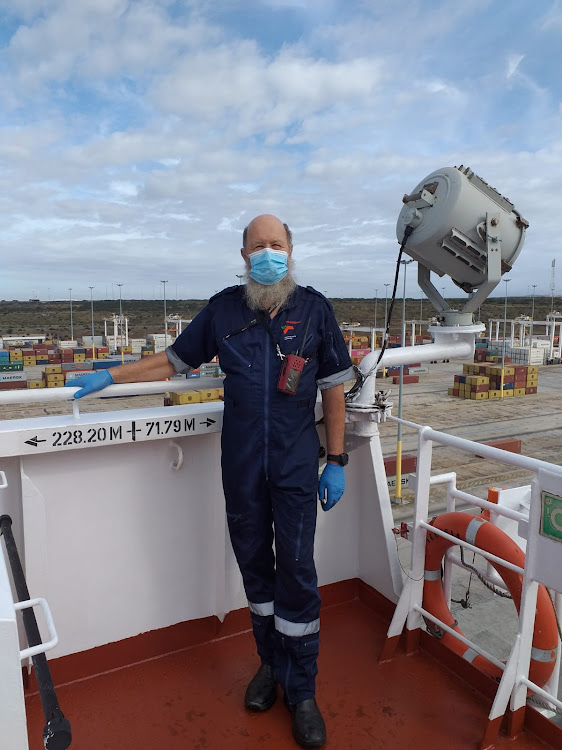 Marine pilot Ziggy Duwe, 62, is responsible for guiding ships in the Port of Ngqura and the Port of Port Elizabeth.
Image: Supplied

A steadfast work ethic, passion for the open water and being a team player have all contributed to a 62-year-old marine pilot becoming the first pilot in Algoa Bay to boast more than 4,000 ship movements.

Ziggy Duwe, has more than 12 years' experience and his responsibilities as a pilot include navigating ships safely in and out of the ports of Ngqura and Port Elizabeth, as well as mastering the harbour tug when it travels to East London and back for dry docking.

Duwe said he regarded his achievement as significant, because the Nelson Mandela Bay ports do not have the high volumes experienced by of the ports of Durban and Cape Town.

“I guess the sea is in my veins. I really enjoy piloting — I am grateful for good health and a measure of fitness.

“You need both, especially if the ship’s elevator is not working, you have to climb the equivalent of 13 stories on some ships,” Duwe said.

Duwe said a love for the sea and being a team player were some of the requirements of being a good pilot.

“When I was at sea many of my colleagues didn’t last long as they didn’t realise the type of dedication required.

“We work any hour of the day or night and in whatever the weather.

“People have asked to join me on a tug voyage to East London, only seeing the smoothness of the waters in the harbour.

“Once out at sea the tug pitches and rolls constantly — 13 hours of this takes its toll,” he said.

It's back to the beach at KZN tourism hotspot St Lucia

Durban may have banned beach-goers from setting foot on its many beaches, but the north coast tourist town of St Lucia is welcoming visitors onto its ...
News
1 year ago

Some of his former challenges have, in hindsight, become his career highlights, including sailing two ships in the windy conditions of the Bay.

“Another highlight was when we had to salvage a ship with engine problems off Mbhashe during one of the tug trips from East London about three years ago.

“We eventually had to tow the vessel to East London. I had to manoeuvre a number of ‘dead ships’ with engine problems into the harbour.”

Duwe’s day starts by touching base with port control to determine shipping movements before handling e-mails and correspondence.

Before shipping, he checks his PPE, the anticipated weather and his hand held radio.

He said he also makes sure that the anticipated move is possible — bearing in mind space, lighting and sufficient berthing crew.

The father of two, who has been married to his wife, primary schoolteacher Jenny for 26 years, said ships nowadays were bigger and afforded less space for movement, which added to the complexity of tug handling required to position them.

“Ziggy’s customer focus and pride as well as his willingness to go the extra mile — working long hours in an unusual environment and enjoying dealing with challenging situations — have contributed to his success.

“Our pilots are true ambassadors for our country as they are the first and last people to see the ships’ crew,” Dubeko said.