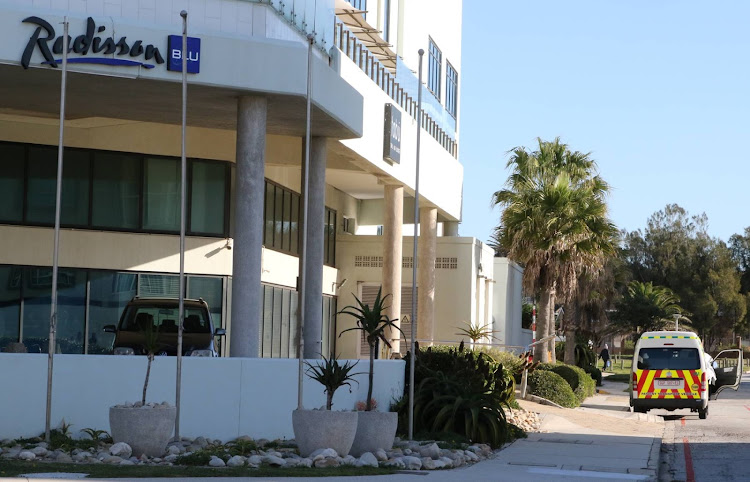 STAFF JITTERS: An emergency services transport vehicle is spotted outside the Radisson Blu in Port Elizabeth on Friday. The luxury beachfront hotel is being used as a quarantine facility for Covid-19 patients.
Image: FREDLIN ADRIAAN

The five-star Radisson Blu hotel in Summerstrand is being used as a Covid-19 quarantine site and staff are not happy about it, claiming some “stubborn patients refuse to stay in their rooms”.

Though the executive assistant manager for the Radisson Blu Port Elizabeth, Elmarie Fritz, confirmed that some patients had not confined themselves to their rooms, she said these were “minimal isolated incidences which were immediately taken care of by the department of health personnel on duty”.

The 173-room luxury hotel — all units have sea views — is at a 27% occupancy rate, with a mix of quarantine patients and people in the city on business.

A screening and testing site will be opened in one of the busiest parts of the Pretoria inner city today in an effort to fight Covid-19 in one of the ...
News
2 years ago

Fritz said the during the lockdown the hotel had not exceeded 40% capacity.

The Radisson is one of 256 quarantine sites in the Eastern Cape — 71 state-owned and 185 privately owned — that to date have cost the department of public works more than R20m.

While the department of public works is getting a bargain at R650 per patient per day at the Radisson — far less than the R1,800 one can book a room for at present — staff at the hotel are less than thrilled, saying they fear the patients who go on walkabout.

“How do you know when you get in a lift that the person in there with you is a guest or a patient?” one staff member asked, adding that some patients were wandering around “as if it is just another ordinary day”.

“The patients are stubborn and won’t stay in their rooms.”

Another said now that the buffet at the hotel restaurant had reopened the fear was that “the patients who won’t stay in their rooms come and queue with the other guests”.

A third employee was horrified when told that, because of staff shortages, employees would have to do work beyond the scope of their normal duties, including making the beds of people in quarantine.

“We have to go back to our families, we have children and we don’t feel safe,” the staff member said.

She said even though rooms were disinfected, many staff did not want to be in contact with the bedding of Covid-19 guests.

All staff members interviewed asked to remain anonymous, with one saying: “We are all just scared of losing our jobs. We are worried but we still need our jobs.”

Fritz denied the hotel was short-staffed and said it had recently received the SGS Disinfection Monitored and Cleaning Checked mark by SGS, “the world’s leading inspection, verification, testing and certification company”.

'Every cent' of R1.19bn spent in Eastern Cape's Covid-19 fight to be accounted for

Every single cent of the R1.19bn spent on buying personal protective equipment and hospital beds in the fight against the spread of Covid-19 in the ...
News
2 years ago

She said the certification meant the hotel had met the highest cleanliness, disinfection and safety measures, based on the successful completion of independent, comprehensive testing by SGS.

“This certification completely disbands any claim that best practice in terms of health and safety is not being followed at the hotel,” she said.

Staff members disagreed, saying employees who delivered food to the patients — standard meals for all in brown paper packets — were equipped only with masks.

“They don’t have PPE, not proper PPE, just masks,” an employee said.

“Also, the maintenance staff have to deliver the food because there are not enough staff.

“We have been told we must do whatever job we are given because we are short-staffed.”

Fritz said the hotel was not short-staffed, but “is rather staffing according to the demand of the occupancy and the type of business in house”.

“For instance, quarantine guests who are confined to their rooms change the operational requirements across all departments.”

She said people staying at the hotel while on business travel were made aware that the hotel was a quarantine site.

“The business travellers are certainly made aware of the quarantine guests.

“However, they do not come into contact at any stage of their stay as the quarantine guest rooms are allocated at least three floor levels away from any other guests.

“The quarantine guests are confined to their rooms throughout their stay, eliminating contact with anyone else.”

On complaints that some staff were put on short time, and favouritism was in play when it came to who was allowed to work, Fritz said: “The allocation of shifts focuses on skill set and the ability to adapt to different roles, which is fundamental not only for hotels but most businesses operating during the current climate.”

Asked about quarantine facilities run by the Eastern Cape department of public works, spokesperson Vuyokazi Mbanjwa said there were 21 such sites in Nelson Mandela Bay and 256 in the province.

In the Bay, six of the sites are being used.

She did not respond to a question on how many of the sites were operating at full capacity.

Asked how it was decided if a person would be quarantined at a site like the Nelson Mandela Bay Stadium or the Radisson, Mbanjwa said public works would receive a request from the health department stating the number of people in need of quarantine and then public works would determine which facilities were available on its database.

“We look at the proximity to where the patient resides and if the other sites are full.”

Mbanjwa declined to provide a full list of all quarantine sites in the Eastern Cape, saying this was because of the stigmatisation the department had noted when it came to Covid-19.

She confirmed a boutique hotel in Summerstrand and a municipal resort were also being used.