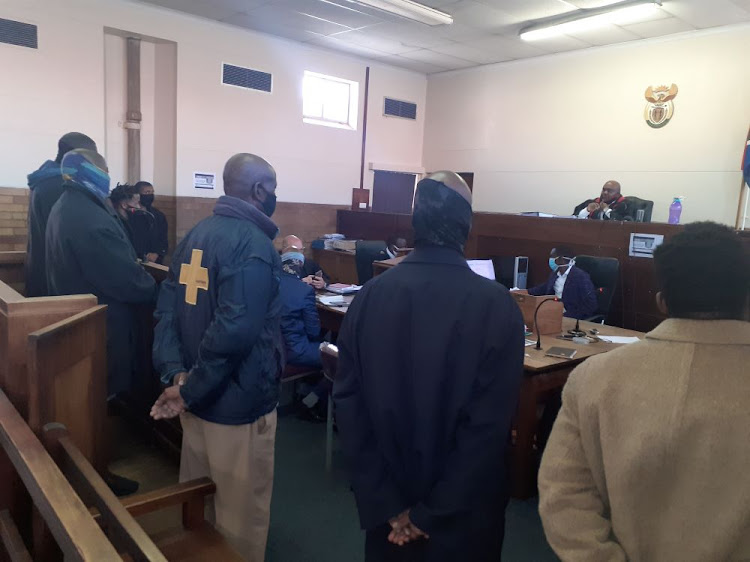 All  42 men accused of the attack at the Modise church have been granted R5,000 bail each by the Westonaria magistrate’s court.

Magistrate Gavin Pillay said the state’s case so far was weak as it had failed to provide certain basic evidence which could link the accused to the killing of five people  at the International Pentecostal Holiness Church (IPHC).

Pillay said the state had failed to link the accused with the firearms that the police confiscated  on the day of the attack. He said it was disturbing that the investigating officer, Sergt George Maditse, could not link any of the firearms to the accused.

Pillay ruled that the state also failed to prove that the accused had common purpose of attacking the IPHC headquarters. He pointed out that evidence before the court showed that the accused who were not arrested at the church were travelling in a BMW M5 and Toyota Quantum.

The accused, Pillay ruled, were not “armed to the teeth” as the firearms were in the BMW M5 and not carried by each individual. “If they were really planning to attack the church, they could have distributed the firearms when they met at BP garage before heading for the church,” Pillay said.

'This is organised crime': Police officer describes suspects in the IPHC church murders

“This is organised crime.” So says the policeman probing the hostage situation that left five people dead at the International Pentecostal Holiness ...
News
1 year ago

He further lashed at  Maditse for failing to explain to the court why there were so many spent cartridges inside the church and not outside. “Why he chose to be evasive, I don’t know. He should not hide information just to develop his case,” he said.

Pillay also cast doubt on how the state could accept that one witness was able to positively identify 20 people. “I am satisfied that at this juncture the state’s case against the accused is weak,” Pillay ruled.

Bail for all the accused was set at R5,000. They are all not allowed to go to the IPHC Zuurbekom headquarters. They cannot have any contact with the witnesses during the course of the case. All the accused with passports must hand them over to the police immediately.

On July 11, a group of people attacked the IPHC headquarters in Zuurbekom, leading to the death of five people. The attack is believed to be linked to the leadership battles taking place in the church.