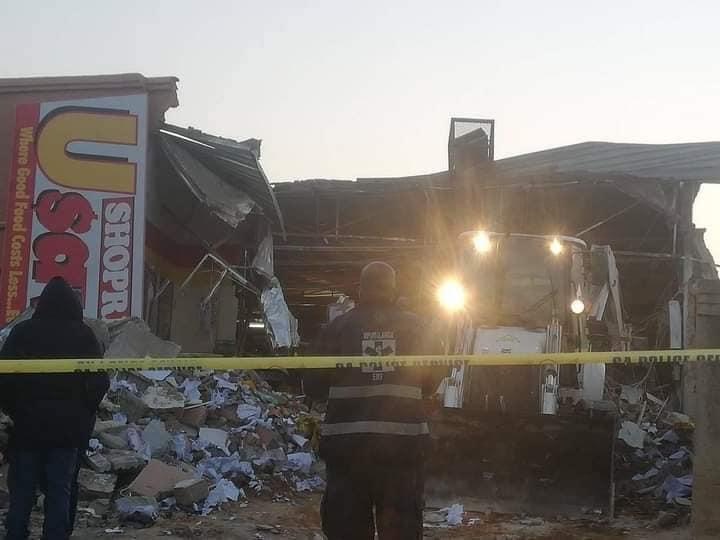 A 32-year-old Mpumalanga man suspected to be part of a gang of about 15 men who bombed a Shoprite Usave store in Pienaar, outside White River on Wednesday morning,  died from the explosion.

Provincial police said the armed men entered the supermarket and detonated a safe. After the explosion, which killed one of the suspects, his accomplices took an undisclosed amount of cash and left him under the rubble.

“Today at about 1.45am at Usave supermarket, there was a bombing. It is alleged that plus-minus 15 suspects blasted  the shop's safe using detonators and took an undisclosed amount of cash. The suspects gained entry through the front entrance. The two security guards heard a blast as they were behind the shop and pressed a panic button,” said police spokesperson Brig Leonard Hlathi.

Hlathi said when police came to the scene a shootout between the police and suspects ensued.

“In that commotion, there were  police members patrolling when the suspects started shooting towards them and there was an exchange of fire. They ran in different directions. Police gave chase on three suspects on foot but they vanished in the houses around the shop. Empty cartridges of high calibre firearm were found on the scene but no police officers was injured during the shooting.

"All role players were summoned to the scene. A bomb disposal unit was present and as they were clearing the scene, they saw a hand protruding underneath the rubble. Upon investigation, it was discovered that it is one of the suspects and the wall had collapsed on him and he was certified dead," Hlathi said.

"The suspect is 32 years old as a driver's license was found in his possession," he said.

Hlathi said police have opened a case of business burglary for investigation and no one had been arrested.

An armed gang escaped with a loot of alcohol after breaking into a liquor store in Berea, Durban, on Tuesday morning.
News
1 year ago

A Durban couple, who pulled off a multi-million rand jewellery heist in 2013 and was on the run since 2018, was arrested in East London on Monday ...
News
1 year ago
Next Article