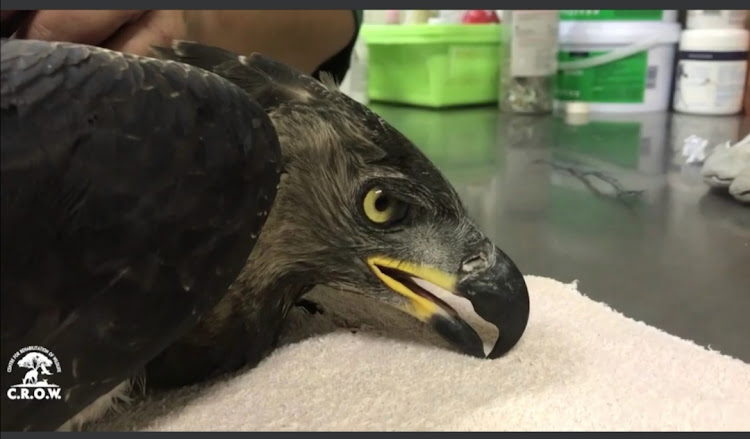 A crowned eagle was euthanised after it was shot and paralysed in the Durban suburb of Malvern.
Image: Crow

A R5,000 reward is being offered to the person who can help put behind bars the culprit who shot a crowned eagle in Durban.

The young female eagle was shot three times with a pellet gun in the suburb of Malvern, resulting in the bird being so badly hurt it had to be euthanised.

The Centre for the Rehabilitation of Wildlife (Crow) said shooting a crowned eagle, which is regarded as a threatened and protected species, is a “highly illegal act” and warrants arrest and prosecution, with up to five years in prison.

The eagle was being studied as part of a crowned eagle research project.

Crow is offering a R5,000 reward for information that leads to the arrest of the culprit, said operations director Clint Halkett-Siddall.

The eagle was rescued by Crow last week after suffering three pellet wounds, one which left it paralysed.

Crow said in a Facebook post: “Sadly, this is the dreaded end to a story we hear often.

“The crowned eagles that naturally occur within the green belts of Durban often share their territory with humans who have pets.

“Though their diet consists mostly of hyraxes, antelope, vervet monkeys and other birds, there have been incidences reported of eagles preying on people's pets, especially around the northern parts of Durban.”

Halkett-Siddall told SowetanLIVE's sister publication TimesLIVE the investigation was being dealt with by Ezemvelo KZN Wildlife.

“We have information trickling in and support from the local community. We have been contacted by individuals who will contribute to the reward, and we will update the amount on our Facebook page once finalised.

“We are hopeful we will apprehend the person responsible and criminal charges will be laid,” said Halkett-Siddall.

A Durban nature reserve shut its gates after visitors disregarded Covid-19 regulations by turning out in large numbers on Saturday.
News
1 year ago