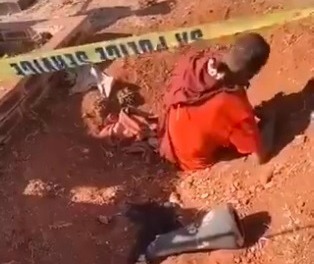 Police responded to the cemetery in Klipspruit West after receiving a call from a security guard about a man who was partially buried.
Image: Screenshot

Police spokesperson Capt Mavela Masondo said officers responded to the cemetery in Klipspruit west around 11am on Monday after being called by a security guard and told  that a man had been buried waist-deep.

Video footage of the incident showed the man pleading for help as onlookers ask what happened to him.

Masondo said the 31-year-old man was assaulted by community members and his feet were bound with shoelaces.

Community members then dug a “grave” and partially buried him, said Masondo, adding that the man had been buried like that since Saturday.

Paramedics treated the man at the scene before transporting him to hospital.

There was speculation on social media about why the man was beaten and buried,  but Masondo said the circumstances surrounding the incident remained unclear.