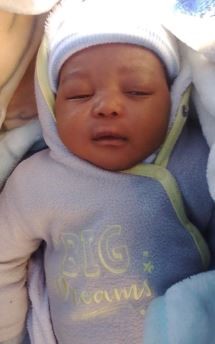 The 18-year-old mother went to the Bloemspruit clinic on Thursday afternoon to collect her medication with her baby boy.
Image: Saps

A two-month-old baby was snatched from a Bloemfontein clinic in the past week, police said on Sunday.

Police spokesperson Brig Motantsi Makhele said the 18-year-old mother went to the Bloemspruit clinic on Thursday afternoon to collect her medication when her baby boy was kidnapped.

“Another lady, who was also in the queue, told her that babies are not allowed in the clinic; therefore she asked that unknown female patient who was behind her to hold her baby while she was going inside.

“When she was done she found that the female had disappeared with her son,” said Makhele.

After asking for assistance from radio station Motheo FM, the mother reported the incident to the police, Makhele said.

A case of kidnapping had been opened.

Anyone with information can contact Warrant Officer Korney Van Zyl at 083 456 5683 or contact Crime Stop at 08600 10111, alternatively send information via MySAPS App.

A KwaZulu-Natal mother has been reunited with her two-year-old son after he was abducted on Tuesday.
News
1 year ago

Baby 'snatcher' hands herself in to police

A Daveyton woman who allegedly stole a baby three weeks ago at Lakeside Mall in Benoni has been arrested after she handed herself to police on ...
News
1 year ago
Next Article