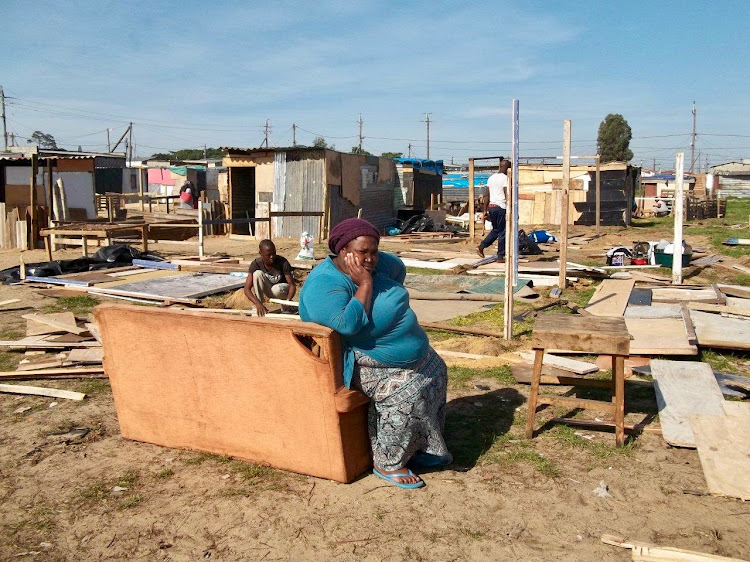 Ntombi Arosi was volunteering as a cook at Masibambane High School, when her sister phoned to tell her that her shack was being demolished by officials. Her building materials were confiscated.
Image: Vincent Lali

A Cape Town metro police officer was burnt when his vehicle was petrol bombed during a volatile protest in Kraaifontein on Saturday.

Violence erupted in the area after community members attempted to occupy land this past week. Officers were deployed after an anti-land occupation operation at Bloemkombos over the weekend, the City of Cape Town said.

At about 2pm on Saturday, a group of about 600 people confronted the city's law enforcement officers.

“A petrol bomb was hurled at a hardened vehicle, resulting in the officer sustaining injuries to his face and arms. He managed to extinguish the flames, avoiding further injuries to his colleagues.

IN PICS | Violent protests over electricity spread through Durban township

A power struggle over the provision of electricity to hundreds of shack dwellers in Lamontville, south of Durban, saw parts of the township blockaded ...
News
1 year ago

“The city is offering a reward for any information that can help lead to the arrest and prosecution of the person responsible,” said mayoral committee member for safety and security JP Smith.

Smith said that in the past week, nearly 40 staff members had been injured during violent clashes with land invaders.

He said the actions could not be tolerated, adding that the city viewed the “barbaric attacks” in a very serious light.

“It is now essential that national government step up and ensure additional levels of policing and POPS as protecting public and private land and upholding the national laws of our country cannot be left primarily to the city.

“I renew my call to the public to report any information that could help identify and track down those responsible for the attacks on staff, but the land invasions and violence in general,” Smith said.

Unhappy residents attacked the City of Johannesburg’s Jabavu Customer Centre with two petrol and a tyre early on Friday morning.
News
2 years ago
Next Article