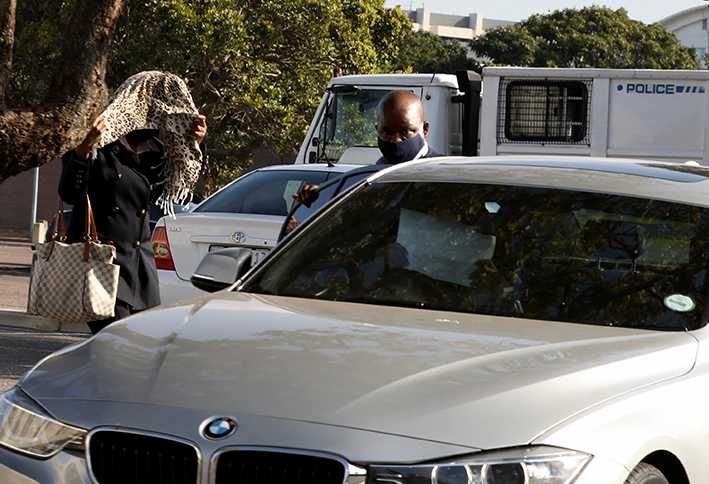 Chief financial officer at the office of the KwaZulu-Natal premier, Ziphathe Cibane, climbs into a car outside the Durban magistrate's court. Behind him businesswoman Gugu Kheswa covers her face. They have been implicated in a R24m catering tender investigation, together with seven others.
Image: Sandile Ndlovu

Four employees in the office of KZN premier Sihle Zikalala have been granted bail on fraud and corruption charges.

The officials, including the CFO, appeared alongside a service provider in the Durban commercial crimes court on Thursday. The charges relate to a host of catering contracts, awarded as far back as the 2012/13 financial year, amounting to about R24m.

The office's supply chain management manager, Nonhlanhla Hlongwane, and three others, who head up companies contracted to the office — Ashley Rose, Ntobimpela Majozi and Sybil Motaung — did not appear for medical reasons.

According to the charge sheet the accused have been charged on a count of fraud and corruption to the tune of about R24m.

The accused are alleged to have “cover quoted”, in that they colluded with one another, along with premier's office officials, and submitted quotes in the names of suppliers that were not in fact trading as separate entities to ensure that in each instance the procurement process was manipulated so that work was granted to Phumalanga Communications, Roren Engineering and Nto's Catering.

A security guard has been injured and a R6m hospital building in northern KwaZulu-Natal burnt to the ground, allegedly to protest the hospital being ...
News
1 year ago

Cibane, Zwake, Makhathini and Msomi were ordered not to communicate, either directly or indirectly, with any of the witnesses of the demands and acquisitions department in the premier's office.

The case was adjourned to October 2 for the additional accused to appear.

Meanwhile, Zikalala said in a statement that some of the officials had already been placed on precautionary suspension pending the conclusion of the internal disciplinary processes.

“Now that the matter is in the hands of the criminal justice system, we are duty-bound to allow the process to unfold. We, however, wish to reiterate our position that as government we are committed to good and clean governance,” he said.

Zikalala said his office was “fully committed” to running a corruption-free government and would deal with all types of fraud and corruption.

“We are fighting corruption. There simply should be no place for the abuse of the public trust, and wherever such occurs it must be addressed as soon possible,” he said.

Nine people, including five employees from the KwaZulu-Natal premier's office, are expected to appear in the Durban commercial crimes court on ...
News
1 year ago

Gauteng premier David Makhura is expected to announce an acting health MEC after a decision by the ANC that Bandile Masuku take a leave of absence ...
News
1 year ago

A security guard has been injured and a R6m hospital building in northern KwaZulu-Natal burnt to the ground, allegedly to protest the hospital being ...
News
1 year ago
Next Article