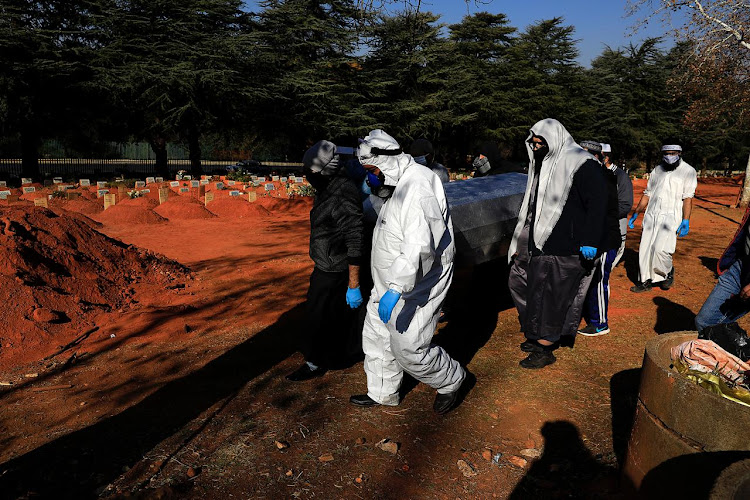 The bodies of those who have died as a result of Covid-19 have to be buried immediately, and the viewing of the body must be kept contactless.
Image: ALON SKUY

Excess deaths from natural causes reached an estimated 22,279 by July 21, according to the latest weekly report by the Medical Research Council (SAMRC).

This is more than four times the number of deaths directly attributed to Covid-19 on the same date.

A co-author of the weekly reports, Prof Debbie Bradshaw, said last week that "the timing and geographic pattern leaves no room to question whether this is associated with the Covid-19 epidemic".

SAMRC president and CEO Prof Glenda Gray said excess deaths associated with the pandemic "may be attributed to both Covid-19 deaths as well non-Covid-19 due to other diseases such as TB, HIV and non-communicable diseases, as health services are reorientated to support this health crisis”.

SA's official Covid-19 mortality rate is 1.58%, compared with a global average of 3.91%. If all the excess deaths estimated by the council are included, SA's all-cause pandemic mortality rate would be over 6.5%.

How deaths from all causes continue to mount. This graph tracks the deaths of people on the National Population Register.
Image: Medical Research Council

The number of deaths from all causes in the week ending July 21 was 16,223 - 63% higher than the predicted number based on historical data.

This is in spite of the fact that the number of deaths from unnatural causes, such as road accidents and homicides, was 29% below the predicted number for the week.

Since May 6 2020, when excess deaths fdrom natural causes started to mount, they have reached 22,279, according to the latest estimate issued on July 29.
Image: Medical Research Council

"When compared with the predicted numbers, there was an excess of 6,256 deaths in the latest week," said the council's report.

Only 915 deaths from Covid-19 were reported by the department of health in the same week.

How Covid-19 is affecting different age groups and different sexes. This chart includes the 471,123 cases reported up to July 29 2020.
Image: Medical Research Council

Two-thirds of excess deaths from natural causes between May 6 and July 21 were among people over 60 - even though most confirmed cases of Covid-19 are occurring in the 30-40 age group. 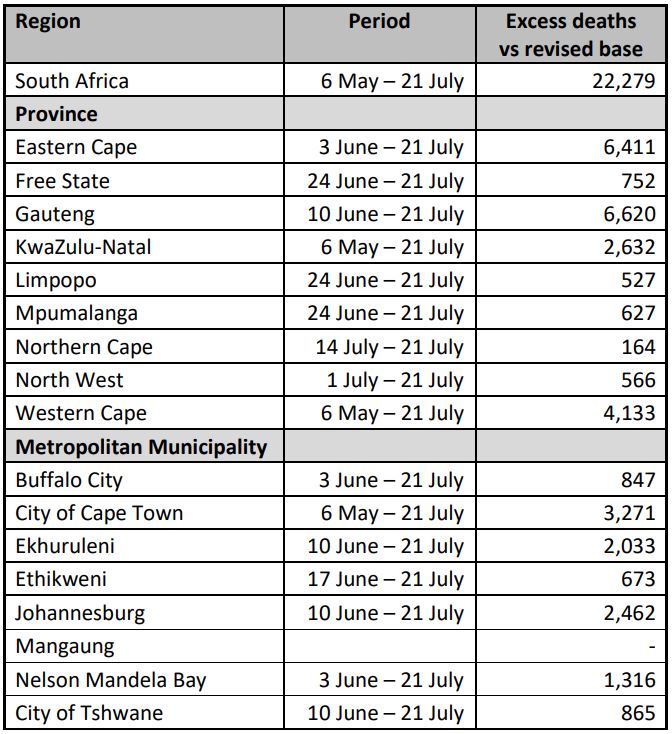 How each province and metro is bearing the burden of excess deaths from natural causes during the Covid-19 pandemic.
Image: Medical Research Council

The council, which compiles the weekly excess deaths report with the Centre for Actuarial Research at the University of Cape Town, said deaths from natural causes continued to increase in most metros up to July 21.

"Compared with the predicted number of natural deaths from historical data in the week ending July 21, Gauteng had 127% more, Eastern Cape had 118% more, Free State had 92% more, KwaZulu-Natal and Northern Cape had 69% more, North West had 58% more, Mpumalanga had 42% more and Western Cape had 34% more."

SA has recorded its lowest daily number of new Covid-19 infections in nearly a month, with the health ministry announcing 7,120 more cases on Monday ...
News
1 year ago

Gauteng sees another 209 Covid-19 deaths in one day