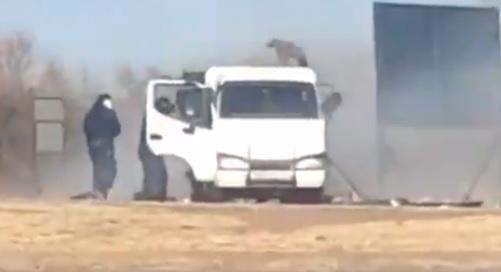 A gang used explosives to bomb the armoured vehicle and fled the scene with an undisclosed amount of money.
Image: Screengrab of video

A cash-in-transit van was blown apart during a brazen heist at a 4-way stop at Letlhabile, near Brits, in the North West.

National police spokesperson Col Brenda Muridili said the cash van was travelling to a shopping centre at around 8am on Monday when it was hit head-on by a bakkie.

Shortly after, an armed gang opened fire on the van and ordered the guards out, said Muridili.

The gang used explosives to blow open the armoured vehicle and fled the scene with an undisclosed sum of money.

No injuries were reported and no arrests have been made.