Isolation together was heavenly, says couple married for 35 years 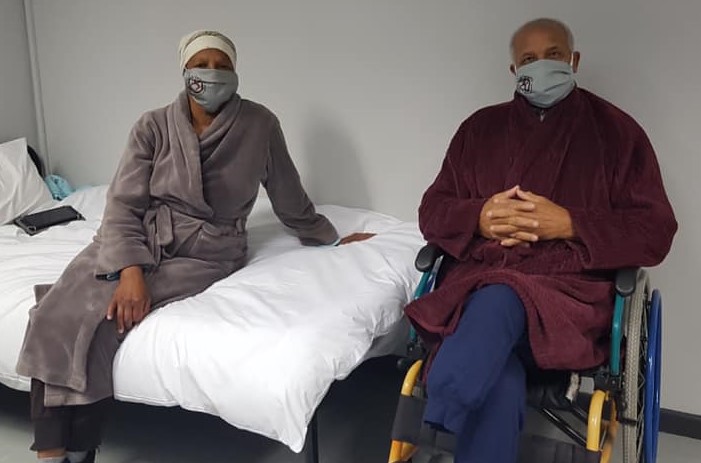 Valerie and Jacob Bruiners, who went into isolation together after testing positive for Covid-19, said it was like a second honeymoon.
Image: Western Cape government

An elderly couple who recovered from Covid-19 said spending isolation together was like a second honeymoon, even after 35 years of marriage.

Western Cape premier Alan Winde used social media on Tuesday to share the story of Jacob and Valerie Bruiners, who are back home in Cape Town after several days in an isolation facility.

Jacob, 67, told Winde: “The place is wheelchair-friendly, the staff are helpful and caring and the love I have for my wife grew even stronger. We bonded with each other and the place was peaceful.

“I have called this place ‘heaven’ because the staff wore white outfits, they treated us well, the other people using the service were friendly and everyone was laughing and made me feel comfortable.”

Valerie, 71, added: “We received three healthy meals a day and it was so much food to eat that we decided to share meals and not waste the food by opening the second plate.”

Jacob, who is wheelchair-bound and has diabetes and hypertension, said he tested positive after experiencing breathing difficulties at home in Surrey Estate, and decided to go to an isolation facility.

“I had to leave my wife behind because I could not safely isolate at home and I understood that it was the best decision for my family,” he said.

Valerie then tested positive, and the Western Cape health department team decided she should join Jacob in isolation.

“After all, it is not right for a wife to be in a strange place without her husband,” she said. “The staff were so helpful. They made arrangements to have me isolate in a double room with my husband.”

Jacob said being joined by his wife raised his spirits, and while in isolation he was able to get out of his wheelchair and use a walker, something he had previously struggled with.

“We couldn’t complain of the service we received, and we were treated well and cared for by people who were genuinely concerned about our health,” he said.

Valerie added: “We were not allowed to lock our bedroom doors in case our health deteriorates and then staff would not have access to assist us, but we felt safe because there were quite a few security guards around.”

Zihlole an app to help stop spread of Covid-19 infections

Emalahleni resident Kenneth Mkhonto has invented an app which may help curb the spread of Covid-19 in the country by detecting unusual spikes in body ...
Business
1 year ago

Gauteng sees another 209 Covid-19 deaths in one day

Government and opposition must unite to beat Covid-19: Zulu king

Speaking during a live Facebook broadcast to mark his 72nd birthday on Monday, King Goodwill Zwelithini called on the government and opposition ...
News
1 year ago
Next Article