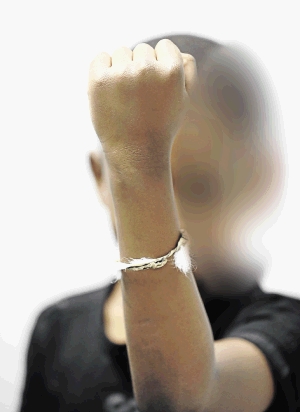 A pastor says the bracelet worn by a 9-year-old 'brings a belief in ancestors, contradictory to our belief in Jesus'.
Image: ANTONIO MUCHAVE

It’s a waiting game for the parents whose child was barred from attending classes at Christian school for wearing isiphandla.

Christian Life Private School in Buccleuch, Johannesburg, remains adamant that the grade 2 pupil cannot attend classes until his isiphandla falls off as his parents are not willing to take it off.

The parents and the school held a heated meeting today in which the school representatives were unmoved by the mother’s plea to allow the child back to the school. Sowetan today reported that a nine-year-old pupil was prevented from entering the school on Thursday and was sent home for wearing a cultural bracelet made from animal skin.

“They emphasised that he should remain at home until it falls off because I did tell them that I’m not going to take it off because it’s not going to happen, it needs to fall off on its own,” the pupil’s mother said.

“They said that he must stay at home until it falls and I said to them that's fine, I will seek advice from the attorneys.”

She said that she would seek legal advice as the school’s conduct constitutes discrimination. Her family’s religion was Christian, but were still in touch with their culture.

“I spoke to my attorney and I asked him if this is allowed and he said no because even [school’s] code and conducts in South Africa are guided by the constitution and the laws that govern the country.

“So, what they are doing is discrimination because we live in a diverse South Africa where everyone is allowed to practise whatever they want regardless that it is a Christian school,” she said.

In the letter which detailed why the child was barred from the school written by pastor and board chairperson Lindsey Lefebure, it said isiphandla was associated with cultural beliefs that the school was against.

"Christian Life Private School does not allow the wearing of this band at school. It brings with it a belief in the protection of the ancestors which is contradictory to our belief in the blood of Jesus and His victory on the cross of Calvary,” the letter reads.

"As a Christian school, we stand very strongly against all forms of spiritual connections, charms, rituals and devices for protection other than of Jesus and the Holy Spirit of God."But the mother today told the school that it was not up to them to decide what black people’s practices meant.She argued that the school’s principal Virginia Naidoo and Lefebure were white and had no authority to speak on black culture.

“The letter was written by the pastor, they [Naidoo and Lefebure] are both white. This is what makes me angry because how can white people conclude about our culture as black people because they will never understand the element of black people’s culture.

“That’s my point, if it was black people then maybe I would understand but it’s white people already concluding that isiphandla is worn for protection from ancestors and there’s no such thing. The whole ritual that was done was to introduce my son to his father’s family and obviously we slaughter [animals] as black people and he wears isiphandla as a symbol [of acceptance],” she explained.

Pupil denied entry to his school for wearing isiphandla

A Christian school has barred a Grade 2 pupil from attending classes because he is wearing isiphandla (cultural bracelet made from animal skin).
News
1 year ago
Next Article