Four dead after dagga-laden car crashes into bakkie on freeway 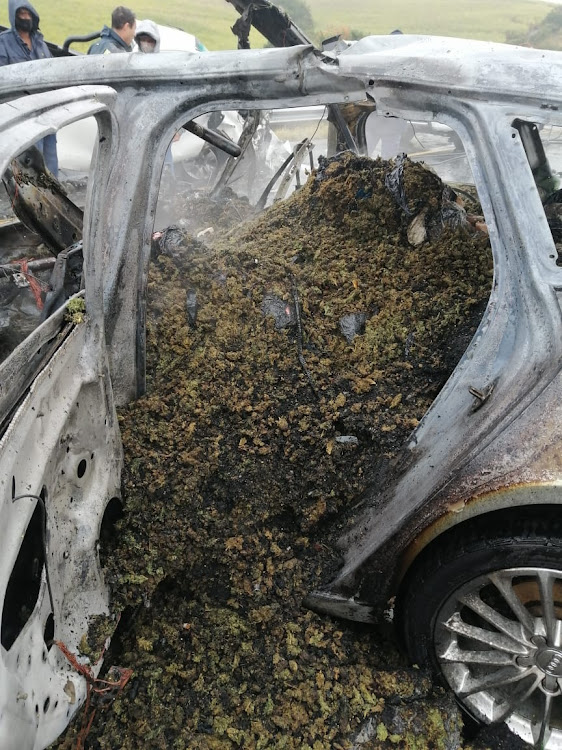 An Audi, loaded with cannabis and cigarettes, crashed head-on into a bakkie in KZN on Monday, leaving four dead
Image: Supplied

Four people died in a horrific crash after their vehicles, one which was laden with cannabis and cigarettes, collided on the N2 in KwaZulu-Natal on Monday.

The incident took place at about 8:30am near Mandeni, on the north coast.

It is alleged that the driver of an Audi, which contained the cannabis and cigarettes, lost control of the vehicle and collided into an oncoming bakkie which was driven by an off-duty Road Traffic Inspectorate officer.

“The estimated street value of the dagga and cigarettes is R500,000. A case of culpable homicide is being investigated by Newark SAPS,” said Gwala.

IPSS Medical Rescue said in a statement that paramedics who arrived on the scene found the Audi engulfed in flames with two people trapped inside.

“A second vehicle also had two occupants within.”

“The passenger of the second vehicle was severely entrapped and showed no signs life and was declared dead.

“The driver of the same vehicle sustained life threatening injuries and advanced life support paramedics from IPSS and Lenmed Ethekwini heart hospital worked to stabilise the man, who is believed to be an off-duty RTI officer.

“Unfortunately, shortly after advanced life support resuscitation was initiated, the patient went into cardiac arrest and was declared deceased by paramedics.”

Dagga couple's lawyer: 'It was not a farm attack. Jules was not shot because he was white'

Julian Stobbs' lawyer said the murdered man would have wanted him to set the record straight.
News
2 years ago

Julian Stobbs, one half of the precedent-setting "Dagga Couple" who fought a five-year battle through the courts for the legalisation of cannabis, ...
News
2 years ago
Next Article