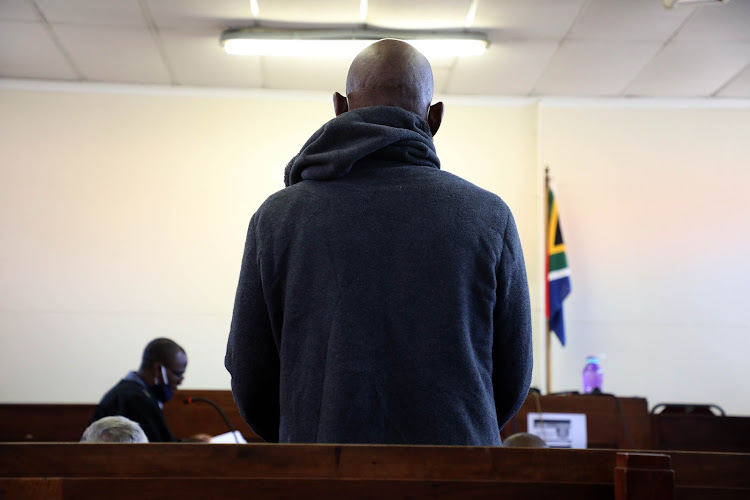 Accused number 1, 2, 3 and 4 were the first to present their bail affidavits in the Westonaria regional court on Monday.
Image: Antonio Muchave

The first seven men linked to the attack at the Modise church have dismissed any involvement to the crime, arguing that they did not even reach the Zuurbekom headquarters on the day of the killing.

Accused number 1, 2, 3 and 4 were the first to present their bail affidavits in the Westonaria regional court on Monday.

In his statement, accused number 1, who is a taxi driver, told the court that he received a call from accused number 22 who owns a security company, asking him to take guards to the International Pentecostal Holiness Church in Zuurbekom.

Accused number 1 said that he then asked his nephew who is accused number 2, and also accused number 3 and 4 to accompany him. He told the court they then went around Pretoria, Kempton Park and Soweto collecting security guards.

He said they then stopped at a garage in Zuurbekom where he waited a little and then received a call from someone who was supposed to help him to get to the church. He did receive the call and explained where they were. The four, together with security guards, were travelling in a Toyota Quantum.

About five minutes later after the call, a BMW M5 came with three occupants who are also accused in the matter.

The three vehicles then headed to the church but on their way, they were stopped by four police vehicles, the accused said in his statement.

He said police ordered them to get out and lie on the ground.

People have started gathering outside the Westonaria Regional Court ahead of the appearance of 41 people in relation to the killing at Modise church.
News
1 year ago

Accused number 1 alleged that police then assaulted them, a version held by all the seven.

“I was even admitted at Leratong Hospital. The police searched all of us and found nothing. Police further searched the two vehicles and found inside the BMW M5 licensed firearms belonging to the Black Water Security. We were all arrested for possession of unlicensed firearms,” he said.

He claimed that the police were told that the firearms belonged to the security company, but they “refused to listen”.

“We never reached the Pentecostal Church or the scene of the crime. We don’t know what happened in the church, so we cannot be linked to what transpired in the church… I have never been involved in any meetings to conspire with anyone to commit any public violence,”  he said.

He said he would plead not guilty to the charges of murder, possession of unlicensed firearms, public violence and being in possession of live ammunition.

Accused number 1 is a 45-year-old single father of three. He received a suspended sentence in 2002 for theft.

A total of 42 men are expected to come before the court in a marathon application for bail. Each man will read their own individual bail affidavit.

The men face charges of murder, attempted murder,  being in possession of unlicensed firearms, being possession of ammunition and public violence.

On July 11, five people were killed when a group of men stormed the International Pentecostal Holiness Church headquarters in Zuurbekom. The attack is believed to be caused by warring factions within the church.

By lunch time only seven men had appeared before the court.