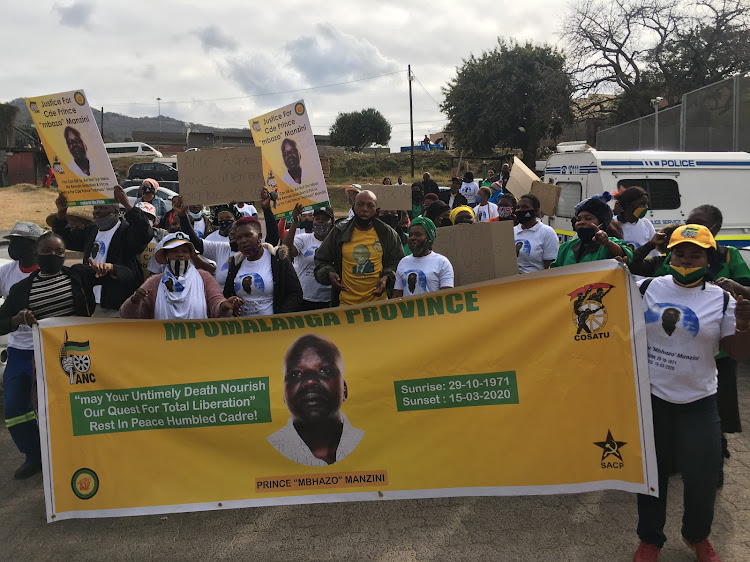 Two ANC groups picketing outside the KaBokweni magistrates court on Friday. One group accuses the arrest of the five as factional justice while the other seek a no bail against the five men arrested in connection with the murder of ANC member Prince Manzini.
Image: Mandla Khoza

It was ANC versus the ANC outside KaBokweni magistrates court in Mpumalanga on Friday during the appearance of five men accused of killing ANC member Prince Manzini.

Some ANC members supporting the accused men sang provocative songs to another group of ANC members who came to sympathize with the Manzini family.

A group of ANC members led by known members of the ANC came to picket carrying placards written “we want free, fair and equal justice for all. Not a factional justice.”

The placards also questioned on what did the accused Lekhuleni brothers, Ngomane and Mabuza do.

When asked to comment by SowetanLIVE the group declined.

Those supporting the Manzini family agreed to speak saying they are surprised that the other group of the ANC members is trying to intimidate the justice department from prosecuting those who are accused of murdering Manzini.

“It’s very shocking seeing two groups of the ANC divided when we lost a member of the party, this is a sign that there’s no unity in this province. We seeking justice for our member Manzini and we are asking ourselves what justice are these members seeking. We believe that there are leaders who leads that group who want to hide something from the public. We hope justice will prevail for our brother, Prince Manzini.” said ANC member, John Hlatshwayo who came to support the group of ANC members that called for no bail against the five.

Manzini, 45, was beaten to death allegedly by six men on March 15 at ward 32 Kabokweni during an ANC branch general meeting at ward 32 which was meant to nominate candidates for the regional and provincial elective conference.

However five men have been arrested on Manzini’s death and according to the Mpumalanga police one man is on the run.

The accused’s bail application was postponed to July 27, in absentia by the KaBokweni magistrates court on Friday.

Manzini’s is believed to be associated with hooligans trying to disrupt ANC meetings and beat up those opposing the factions.

Spokesperson for the Mpumalanga police Brigadier, Leonard Hlathi said the five are facing charges of murder, intimidation, public violence and assault with an intent to cause grievous body hard (GBH).

The ANC in Mpumalanga has been a skeleton since December 2017, when it’s then chairperson David Mabuza was elected to the national executive committee of the party along his then deputy Violet Siwela.

Since then the party failed to hold a provincial general council to replace Mabuza and his then deputy and one additional member, Candith Mashego Dlamini.

In March another man lost his life during an ANC meeting at at ward 17, at Msukaligwa local municipality in Ermelo in what is believed to be a leadership dispute between party members.

ANC members in Mpumalanga have lifted the lid on what they believe is hooliganism used by warring factions as they fight to have their own people ...
News
2 years ago

Acting chairperson of the ANC in Mpumalanga, Mandla Ndlovu and premier Refilwe Mtshweni-Tsipane are vying for the position of chairperson to lead the party in the province.

Three of the five men arrested are the Lekhuleni siblings and sons of a taxi boss and according to community members they are known hooligans who beat up people if called to “solve” someone.

One member who attended the meeting at KaBokweni where Manzini died told Sowetan that of the five men arrested only Mabuza and Ngomane belong to their branch but the Lekhuleni brothers managed to find themselves in the meeting and they believe they were hired.

“Everybody knows them here, they stay in the same township but not at ward 32 actually they are belonging to ward 33 if they are real members of the ANC. We heard information that they were called to solve people who disagree with Mabuza and Ngomane in the meeting. These people are dangerous, if they know that I spoke to you they can come to my house and beat me or kill me,” said the source.

Another independent source from the ANC corroborated the information that the Lekhuleni brothers were called by a senior leader of the ANC to come to the meeting.

“What we know is that Manzini was targeted by these people, but not only him even ourselves if we happened to be in that meeting we were going to be assaulted or maybe shot,” said the ANC source. A week before Manzini was killed another meeting was called off after a gun was fired inside the meeting.

At the time acting chairperson Mandla Ndlovu condemned the incident speaking to Sowetan.

Joe Manzini a brother to the deceased said their wish is that the arrested men divulge the names of the mastermind behind the disruption and the murder of his brother.

“For now we are happy that there are people arrested regarding my brothers death. We wish that they don’t get bail, before they tell us who was behind the killing because it’s clear they were bought to kill my brother. The court is our hope now, we asking for justice for our brother as a family.” said the brother Joe Manzini.

Spokesperson of the ANC, Sasekani Manzini (not related to the deceased) commended the police for the arrest of the five men.

“As the ANC we want to see anyone who have been found to have broken the law to be prosecuted. We are therefore happy that the law is taking its cause on this matter involving the death of a member of the ANC. Even if people are members of the ANC, they have no right to kill anyone, hence we saying the law must take its cause,” said Manzini.

She said the party is still going to check on how the Lekhuleni brothers found themselves in a meeting outside their ward.

“The ANC is going to find out if these three people from ward 33 are real members of the ANC and how did they happen to be in a meeting of the ANC in another ward,” said Manzini.

Hlathi said they are expecting more arrests on the death of Manzini.

“For now we can confirm that one person is on the run on the case and we expect more to be arrested as the investigation continues,” said Hlathi.