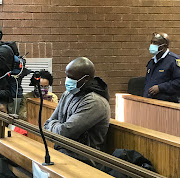 The family of slain Tshegofatso Pule has pleaded with the public to be patient while the matter is before the court. Tumisang Katake, Pule’s uncle, told reporters outside the Roodepoort magistrate's court on Thursday that the family was pleased with the pace at which investigations were proceeding.

“The police are expediting the process and we can’t fault their efforts because they are keeping us abreast and continuously informing us of the progress and [what]they are going to do,” Katake said.

He said the family had mixed emotions about seeing Muzikayise Malephane, 31, who is accused of murdering his niece. Malephane’s matter was postponed until September 29 as the state awaits DNA results, cellphone records, a chain of evidence and possible witnesses.

“It’s sad [seeing him] because we want to know why they did what they did. Seeing him in court just reminds us of the ordeal,” Katake said. “Personally, and this is my opinion, I don’t think he committed this crime alone and we are hoping more arrests will be made.”

During court proceedings, prosecutor Musa Makhubele told the court that investigations would determine whether more arrests will be made. “Investigations are ongoing and we are leaving room for any other suspect to be arrested,” he said.

Sowetan previously reported that Malephane allegedly revealed to police details of how he planned and executed Pule’s murder with the help of a person known to her.According to a police statement seen by Sowetan, he told investigators that he was promised R70,000 for the murder of the mother-to-be.

Sowetan has established that Malephane, 31, allegedly planned Pule's murder and had tried killing her a month before her death but was unsuccessful.In the failed attempt on Pule's life in May, Malephane and the other party allegedly set up a false interview in Mondeor, Johannesburg, where Pule was supposed to be kidnapped and killed when she turned up. She did not.The two then allegedly hatched another plan.

Muzikayise Malephane appearing in the Roodepoort magistrates court for the murder of #TshegofatsoPule. The matter has been postponed until September 29 for DNA results and further investigations @SowetanLIVE pic.twitter.com/vB9BTsX9jO

"On the day of her murder [June 4], both suspects arranged an Uber ride for the victim to be picked up and [taken] to a flat in Florida," the statement reads.“Then both suspects started an argument with the victim while driving and as a result the other party allegedly took out a sharp object and stabbed the victim several times."They then proceeded to [bushes in] Durban Deep, hanged her with a rope on the tree and left her helpless."Police are yet to make an arrest of the second suspect.

Malephane allegedly confessed to police and also pointed out the crime scene.The body of Pule, 28, was found with stab wounds and hanging from a tree in a veld in Durban Deep, Roodepoort, the next day, on June 5.

Malephane was arrested while returning from Mpumalanga more than a week after Pule's killing.

Meanwhile, magistrate John Baloyi lashed out at the public for verbally attacking court personnel after Malephane’s second court appearance. “I must say it was a disgusting act and I felt disappointed that our own did this to female personnel and hurled insults at them. I appeal to the public to treat them [court personnel] with dignity,” Baloyi said.