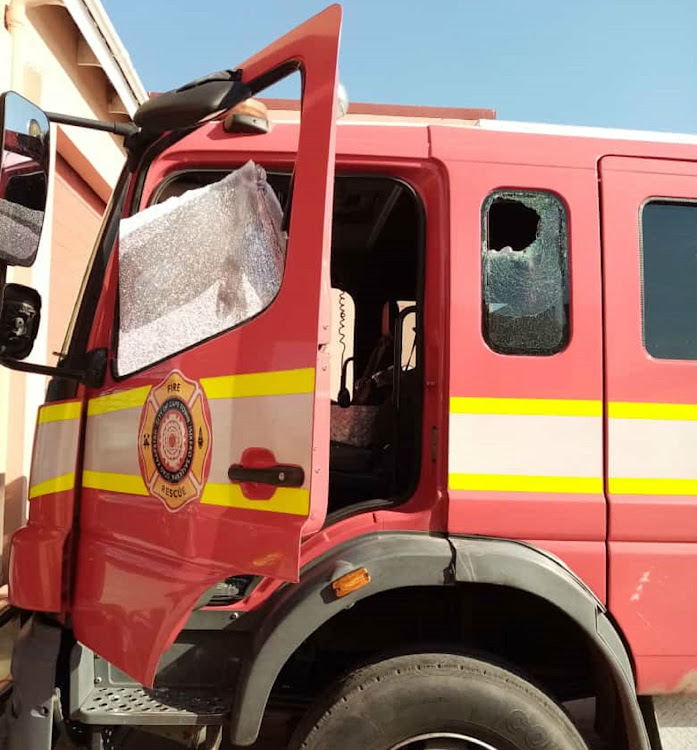 One of the three fire engines that were stoned while responding to an emergency call in Khayelitsha amid violent protests in the area.
Image: City of Cape Town

Firefighters were petrol bombed and their vehicles stoned three times in two days while responding to emergencies in neighbourhoods gripped by violent protests in Cape Town.

Mayoral committee member of safety and security JP Smith said a fire truck was stoned in Khayelitsha on Tuesday and another was petrol bombed in Mfuleni an hour later. Both suburbs are in the midst of a second week of violent protests and attempts by authorities to curb at least eight land invasions happening across the city simultaneously.

The crew whose fire engine was petrol bombed in Mfuleni were en route to a call when they were attacked around 7:30pm on Tuesday.

Two people have been killed and two others wounded in taxi shooting  Marabastad.
News
1 year ago

“The attackers threw stones at the vehicle, but also a petrol bomb. Staff saw flames on the right side of the crew cab, but they didn’t stop and drove to the Blue Downs police station instead,” said Smith. “Fortunately, the vehicle didn’t catch alight, and no-one was injured,” he said.

Another fire truck with a police escort was petrol bombed in Mfuleni on Wednesday evening.

“The roof lining caught alight, but staff were able to extinguish the flames in time,” said Smith. “The city condemns these cowardly attacks on our staff. The fire and rescue service is there to help communities,” he said.

“The ongoing attacks on staff could seriously affect service delivery to our most vulnerable communities, as crews will not be entering flashpoint areas without police escorts, which will slow down response times to fires and other emergencies,” said Smith.

“I renew my call on the public to please report any information they may have about those responsible for the violence to our public emergency communication centre by dialling 021 480 7700 from a cellphone or 107 from a landline,” said Smith.

One dead, another critical after N2 truck accident near Tongaat

One person has died and another been left in a critical condition after a truck accident on the N2, north of Durban, on Thursday
News
1 year ago
Next Article