'Taxi people want to own our lives by force' 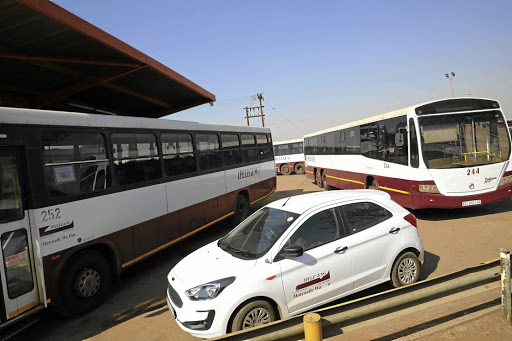 A bus driver has told how an early morning ride turned ugly when he was attacked, allegedly by taxi drivers, as tensions over passengers boiled over.

The driver, who asked not to be named, told Sowetan yesterday that he was surrounded by four taxis and two cars whose occupants shot the tyres.

He was on a 3am round to pick up other drivers. They demanded that he switch off the bus and get out if he wanted to stay alive. Scared and not sure whether he had been hit or not, the distraught driver complied.

"I had gone to fetch my colleague and when I was hitting a U-turn, four taxis and two small cars surrounded me. They got off and approached the bus and started pushing the door. They told me to get off, and that they don't want to see any bus as they were tired of the buses.

"They told me to leave the bus where it was if I wanted to live. They then shot three times with a gun and the tyres started losing air.

"I did not see which association they were from as they did not have any stickers. I only saw that one taxi vehicle was an Inyathi model and three others were Toyota Quantums.

"There was a lot of them in the taxis. They wanted to immediately torch the bus but one person told them to not do that.

However, a couple of minutes after arriving at the depot, a call came through that the bus was on fire.

Commuter organisations have welcomed the agreement signed by taxi bosses to end violence in Gauteng, but are skeptical that the sector will live up ...
News
1 year ago

The incident left thousands of commuters stranded yesterday following the indefinite suspension of services by Ipelegeng Transport due to the violent incident.

The company operates a service in the Vaal area, where 3,500 commuters in Orange Farm, Evaton, Sebokeng, Meyerton and Bophelong, among others, were affected.

The taxi fare for the Sebokeng and Vanderbijlpark and Vereeniging routes increased from R15 to R19 and R20 last month sparking an exodus of commuters to more affordable bus services, according to locals.

The taxi operators have now vowed that buses will not operate until they also increased their prices and decreased their fleet.

"We must tell them that we want to use buses [and] it's with our own money. They can't force us to use taxis where they even treat us badly," a bus commuter who did not want to be named said.

A commuter said: "I'm very hurt about what the taxis are doing. They fought to have their prices increased and then packed them up to 100% capacity and now they stopped buses from operating."

She added: "Now we're forced to use taxis? We have our rights; we work for our children as much as they do the same as well."

Another commuter explained that taking a taxi was costly as she would have to part with R74 a day just to get to work as the mode of transport forced her to connect in other places while a bus costs her around R30.

"Our lives are being owned by taxi people. Now they are forcing us to use taxis. Where are we going to get all that money? It's unfair," she said.

Transport minister Fikile Mbalula says the government is not able to provide more than the R1bn relief it is offering the taxi industry.
News
1 year ago

Ipelegeng Transport manager Kamohelo Phele said they have opted to suspend all bus services after one of their buses was shot at before being burnt down yesterday morning.

"One of our buses was shot at and burnt to the ground this morning. The damage was as a result of a taxi dispute over passenger loads.

'Taxi passenger loads were reduced as a result of taxis increasing their fares sharply in the last few weeks," Phele said.

About 100 Ipelegeng buses were packed at the company's depot in Sebokeng yesterday after services were suspended.

Phele said their operations have been seeing increased numbers of commuters after taxi associations raised their fares for trips between Sebokeng, Vanderbjilpark and Vereeniging by R5 last month.

"Following the R5 increase in taxi fares... tensions intensified as passengers began to migrate to buses. Taxis (then) defied the loading restrictions and ignored the call for social distancing, which lead to a further migration of passengers (to buses)," Phele said.

He said their drivers have been threatened since last night allegedly by local taxi operators.

"The intimidation and death threats are not new to us. The morning of (last month's) strike, taxis arrived at the depot at 3.30am, dishing out death threats to our drivers. Buses did not operate on that day."

He said "services will only resume once the government has resolved the dispute as it is not safe for our drivers and passengers..." - Isaac Mahlangu

Taxi fares are going up from July, will be reasonable to commuters: Santaco

Santaco announced on Friday that taxi fares would increase nationwide from July 1.
News
1 year ago

Tough times lie ahead for commuters in Johannesburg after 76 taxi associations said they were also planning to hike their prices in an effort to ...
News
1 year ago

Operators who fall under the governing structure of the SA National Taxi Council (Santaco) are currently on a go-slow in response to the government's ...
News
2 years ago
Next Article