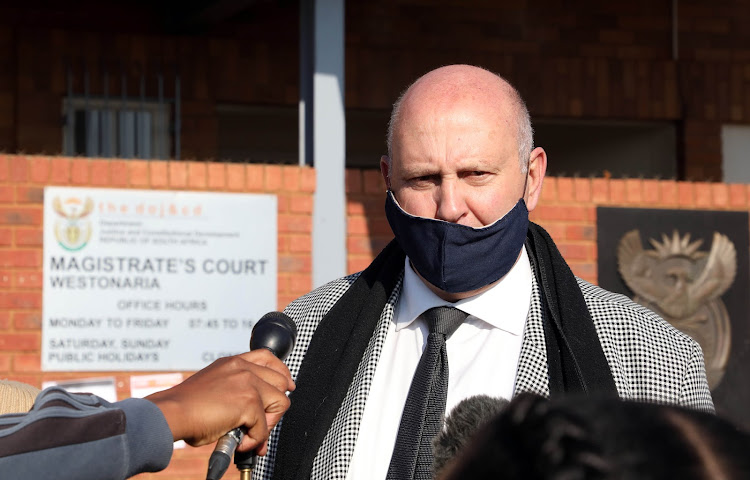 JULY 22 2020 Eric Bryer at the Westonaria Magistrate's court where the 41 accused on the attack at the Modise Church were set to appear
Image: ANTONIO MUCHAVE/SOWETAN

Well-known lawyer Barry Roux is among the legal heavyweights who have been brought in to represent some of the people facing charges in relation to the killings at the International Pentecostal Holiness Church.This was confirmed by lawyer Eric Bryer outside the Westonaria Regional Court where 41 people linked to the church attack were scheduled to appear on Wednesday.

Roux made his name when he represented Paralympic medallist "Blade Runner" Oscar Pistorius in his murder case. Bryer said there were more than 41 people who were supposed to be in court on the day.

“There are actually 43 suspects, two are in hospital. The matter is being postponed today and it could not be heard because there was a positive case of corona at the court. The court has been closed for decontamination until Monday.

The court case of 41 people arrested in connection with an armed attack at the International Pentecost Holiness Church (IPHC) at the weekend did not ...
News
1 year ago

“There are multitudes of difficulties. The accused are not being brought here because corona is so rife and it is unsafe to bring them. The legal team are unable to consult with their clients but the prosecution with the consent of the chief magistrate has agreed that for bail application, affidavits will be filed by this afternoon. The state will be entitled to reply to them by tomorrow afternoon via e-mail,” said Bryer.

“Supplementary affidavits should be filed by Friday and we hope that the matter should be set down on Monday and proceed. With 43 applications, the safest way is to do each and every one individually; we are trying to make arrangements to do so in court on Monday.”

Bryer said the previous magistrate agreed to hear the matter at the car park but the chief magistrate holds a different view. Five people were killed when a group of armed people stormed into the IPHC headquarters in Zuurbekom on July 11 in an attack that shocked the nation.

The attack ended up in a hostage drama and a police special task force was brought in to deal with the situation.More than 40 people were arrested on the day and police recovered 68 firearms which included 17 rifles, 24 shotguns and 27 pistols. The attack is believed to have been caused by warring factions in the church.

IPHC has not had peace since the death of its founder's son Glayton Modise in 2016. The church split into two factions and their spat ended up in court.The Leornard Modise faction, which is based at the heardquarters, blamed the attack on the Jerusalema faction led by his half-brother Michael Sandlana.