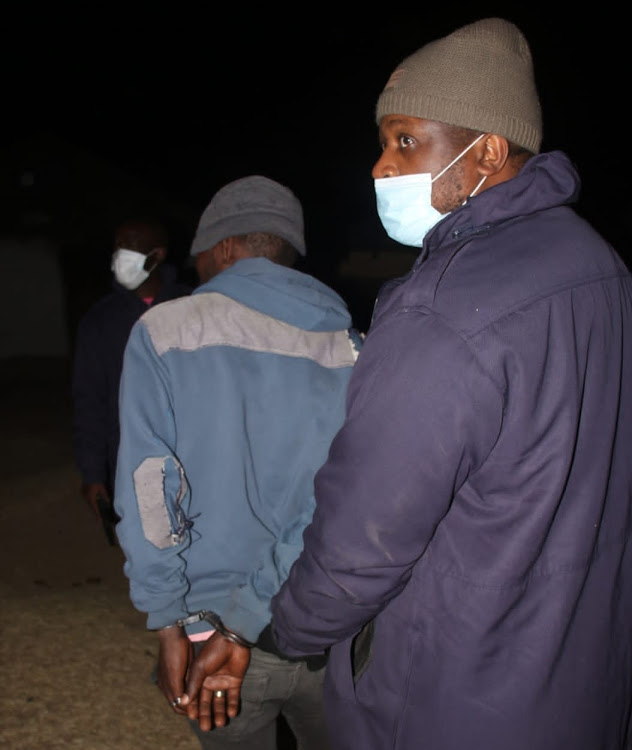 Police officers arrested a 35-year-old man in the Eastern Cape on Thursday morning. He was wanted in connection with two rapes committed in KwaZulu-Natal.
Image: SAPS

After more than a year of evading arrest, a 35-year-old man from KwaZulu-Natal was arrested on Wednesday on two counts of rape, one of which was a gang rape.

The man was arrested by members of the Inanda Family Violence, Child Protection and Sexual Offences (FCS) Unit at his hideout in Mount Ayliff (eMaXesibeni) in the Eastern Cape.

Police spokesperson Col Thembeka Mbele said in January last year the man had allegedly been drinking at a tavern in Sydenham, west of Durban, with his friends while in the company of one of his friend's girlfriend.

“Following the drinking spree, their friend and his girlfriend were drunk and had passed out. The suspect together with two men decided to rape their friend's girlfriend. They took turns raping her until she woke up. When she realised what was happening to her, she was disgusted and she jumped up,” said Mbele. “The perpetrators tried to calm her down but she was not willing to entertain their excuses. She reported the matter at the Sydenham police station where a rape case was opened and transferred to Inanda FCS Unit for investigation.”

Mbele said when the perpetrators realised the police were hot on their trail, they disappeared.

“In February of 2019, the 35-year-old suspect assaulted a young woman at a communal bathroom in Sydenham accusing her of calling him a derogatory word. A 24-year-old woman who was with the victim protested and told the suspect that the female he was assaulting did not say anything to him.”

This angered the man who turned his attention to the 24-year-old woman and threatened her with a knife. He allegedly took her to his girlfriend's room and raped her repeatedly.

“When he finally let her go, she reported the rape at the Sydenham police station. The matter was again referred to the Inanda FCS Unit for investigation,” said Mbele.

“The trail of the suspect went cold until the investigators learnt of the possibility that the suspect was in the Eastern Cape, in a small rural town at Mount Ayliff.”

She said investigators proceeded to Mount Ayliff, and following information, were able to locate the suspect’s hideout.

“At about 2am this morning, Inanda FCS detectives, assisted by Mount Ayliff police officers, went to Mvalweni area where they arrested their suspect. The 35-year-old man will be charged with two charges of rape and will appear at the Durban magistrate’s court on Friday,” said Mbele.

Life sentence for rapist of grandmother (82)

A 29-year-old man who raped an 82-year-old grandmother has been sentenced to life in prison.
News
1 year ago

Umlazi magistrate who was soft on child rapists suspended

Controversial Umlazi magistrate Kholeka Bodlani, who is accused of being soft on child rapists, has finally been suspended, a year after the ...
News
1 year ago
Next Article