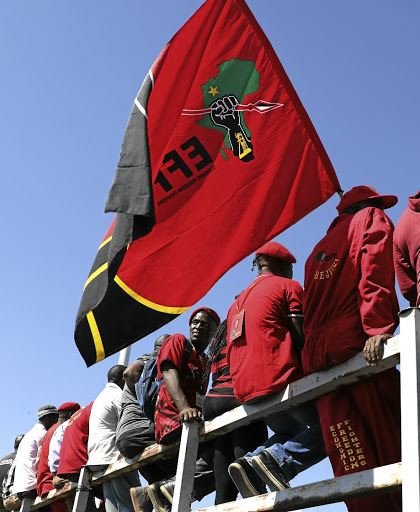 EFF has sacked a councillor in the North West. / SANDILE NDLOVU

The EFF in the North West has expelled one of its JB Marks local municipality councillors after it emerged that he and his colleague allegedly demanded about R3m in exchange for their support for the passing of a municipal budget.

According to EFF provincial secretary Papiki Babuile, the party expelled its councillor Chester Moeletsi after finding him guilty at a disciplinary hearing for breaching the public representative code of conduct.

The expulsion follows the party's hearing that found that Moeletsi wanted to be given large amounts of money to help ANC-controlled municipality budget.

JB Marks municipality was set after 2016 elections to cover the towns of Potchefstroom and Ventersdorp.

"Mr Moeletsi did not pitch for the disciplinary hearing on Wednesday (July 8) and the hearing continued in his absence. The DC (disciplinary committee) found him guilty and the verdict was expulsion from the organisation," said Babuile.

The case against EFF leader Julius Malema for allegedly discharging a firearm in public will not be heard on Thursday, the National Prosecuting ...
News
1 year ago

It was at a huge cost for Nelson Mandela and other leaders of his generation to rise and challenge a callous, but formidable state such as apartheid ...
Opinion
1 year ago

Moeletsi and Thabiso Morulane were allegedly caught after audio recordings surfaced in which the municipal budget was discussed and they apparently asked to be paid R3m before attending a council meeting where the budget was set to be passed.

Babuile said Morulane attended his disciplinary hearing, pleaded guilty to all charges and his matter has since been referred to the national disciplinary committee of the party for finalisation.

"Mr Morulane confirmed at the hearing that it is [him and Moeletsi] in those voice clips [demanding payment]."

Babuile said Morulane told the committee that they initially asked for R5m but later lowered the amount to R3m.

After the alleged incident, Morulane tendered his letter of resignation as councillor of the EFF in the municipality and as member of the regional command team of the party in the Dr Kenneth Kaunda region. When contacted for comment, Morulane said he did not want to talk about the matter.

Moeletsi said: "Can you please afford me space to deal with the EFF and when done, I will give you the interview."

Babuile said they opened a case of corruption against the two with Potchefstroom police.

Municipal spokesperson William Maphosa said the office of the speaker is still investigating the matter. The budget in question was provisionally adopted on July 3.