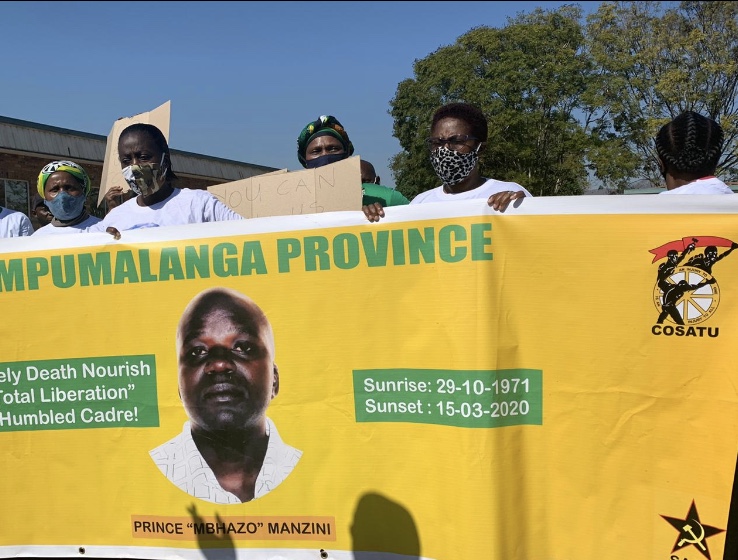 Supporters of the late Manzini protested outside of court
Image: Mandla Khoza

Five ANC members arrested in connection with the murder of a fellow ANC member during a nomination meeting in Mpumalanga have been remanded in custody.

The party in Mpumalanga has failed numerous times to hold a provincial general council to replace Mabuza and his then deputy Violet Siwela after they were elected in the national executive committee in December 2017.

Mpumalanga police say Manzini, who was publicly supporting Ndlovu, was beaten with chairs and fists and died from his injuries at a local clinic the same day.

“The men have been charged with murder, public violence, and assault with intent to cause grievous body harm. This came after a fight inside a meeting at KaBokweni on March 15 which led to the death of Prince Manzini,” said Mpumalanga police spokesperson Brig Leonard Hlathi.

Five Mpumalanga ANC members have been arrested in connection with the murder of a fellow member who was beaten during a meeting meant to nominate ...
News
2 years ago

The five did not enter the court but were kept in the police bakkie while the magistrate, state prosecutor and their legal representatives postponed their bail application to Friday.

ANC members supporting Ndlovu were singing political songs outside the court with placards written “no bail” and others written “you can kill us but we remain focus” with banners bearing the face of Manzini.

“Focus” is the faction supporting Ndlovu while the ones supporting Mtshweni-Tsipane are calling themselves “Ngci”.

Ndlovu’s faction is accusing Mtshweni-Tsipane’s faction of ordering a hit and disruption of the ANC branch general meetings which were meant to nominate leadership preference towards an elective conference which had to be called off after the Covid-19 outbreak.

The EFF in the North West has expelled one of its JB Marks local municipality councillors after it emerged that he and his colleague allegedly ...
News
2 years ago

The deceased's brother Joe Manzini said their wish is that the arrested men divulge the names of the mastermind behind the disruption and the murder of his brother.

“For now we are happy that there are people arrested regarding my brother's death. We wish that they don’t get bail before they tell us who was behind the killing because it’s clear they were bought to kill my brother," he said. "The court is our hope now, we asking for justice for our brother as a family.”

Spokesperson of the NPA in Mpumalanga, Monica Nyuswa, told Sowetan that the five are going to apply for bail on Friday after the date was fixed between their lawyers, the prosecutor and the magistrate.

Spokesperson of the ANC in Mpumalanga, Sasekani Manzini (not related to the deceased), told Sowetan that they are happy that the law is taking its course.

“As the ANC we want to see anyone who has been found to have broken the law to be prosecuted. We are therefore happy that the law is taking its course on this matter involving the death of a member of the ANC. Even if people are members of the ANC, they have no right to kill anyone, hence we saying the law must take its course,” said Manzini.