No work, no pay likely should schools close 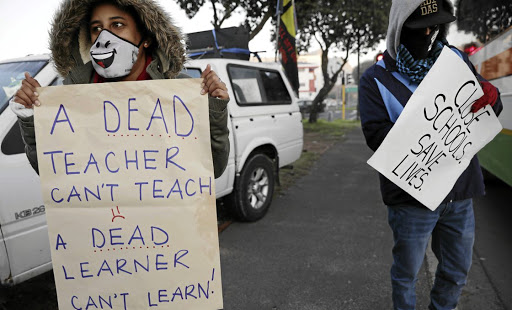 Teacher unions are pushing back against a move to dock their pay should schools be closed again due to the upsurge of coronavirus cases.

This arose at a meeting between unions and the department of basic education on Friday when minister Angie Motshekga apparently wanted to know why teachers must be paid full salaries for staying at home during Covid-19 while other public servants are working.

The meeting was convened after five teacher unions in the Education Labour Relations Council unanimously resolved last week that schools should be shut down owing to the spike in infections in schools across the country.

Naptosa's executive committee member Basil Manuel said the onus was on the department to make it possible for teachers to work from home.

Five education unions have resolved that schools should be closed with immediate effect.
News
1 year ago

"Nobody is asking for another break or to give teachers a holiday, this [calling for schooling to be immediately suspended] is done due to the pandemic," Manuel said.

He confirmed that the minister raised the issue during the meeting, but he added that teachers were in a unique position and could not be compared to other civil servants.

"We are saying there are many children that even with the best intention in the world, will not access anything online even if it's on TV. We are saying we must create workbooks which are put together and they can go hand them out," Manuel said.

Another union member who attended the meeting, but wished not to be named said teachers expected to be paid in full just like parliamentarians who are working from home, but are getting full salaries.

"Teachers will work from home if they are capacitated to do so. They will do lesson preparations, collate learning activity packs for learners and distribute them to parents," said the unionist.

"In this case, a day or two will be declared for teachers to go to school alternately, make copies, package and submit to HoD. Parents will be asked to come and collect on certain days and also submit same work on certain days. Teachers will control the work and give feedback to learners."

Basic Education spokesperson Elijah Mhlanga said Motshekga on Saturday convened a meeting of the Council of Education Ministers to deliberate on the inputs received from stakeholders.

Mhlanga added that now that Motshekga has concluded the consultation process, she is now processing a comprehensive report through structure of the government and eventually with the national coronavirus command council and cabinet.

PEU president Johannes Motona said there is already a lot of anxiety among teachers due to the spike to Covid-19 infections at schools.

"We are really worried about the safety of our members. Being at home does not mean they will not be doing their jobs. The department should rather introduce the teachers to digital learning," Motona said.

It's better to lose the school year than lives: Mmusi Maimane

One South Africa leader Mmusi Maimane believes it is better to lose the school academic year than to lose lives.
News
1 year ago

Another sticking point was on unions not clearly stating for how long they wanted schooling to be suspended with Motshekga apparently telling them schooling can't be suspended indefinitely.

Manuel said they asked for schools to be closed for the whole of August and all parties could reconvene then to decide on the way forward depending on how the coronavirus pandemic is behaving.

Some parents have expressed frustration with the confusion around schools.

A parent, Nelisiwe Zwane of Boksburg, said: "The virus is at its peak and it is not a good idea that our children should be exposed to it. They should rather repeat a grade next year when everyone is safe."

General secretary of national school governing body Matakanya Matakanye said they proposed that grade 12 pupils be taken to camps to continue with curriculum.