Fiery clashes force Eskom to pull out of Khayelitsha 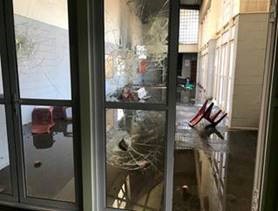 A clinic in Khayelitsha, Cape Town, was ransacked over the weekend, according to the city.
Image: Supplied

Eskom suspended operations in Khayelitsha, Cape Town, on Monday after a vehicle was stoned and set alight following a weekend of violent protests linked to land invasions.

A bus was also damaged in the fiery protests.

The national power utility said on its official Twitter page on Monday that it would continue assessing the risk in Khayelitsha and provide an update when the situation changed.

#EskomWesternCape has suspended operations in Khayelitsha, Cape Town with immediate effect after an Eskom vehicle was stoned and set alight.

We will continue assessing the risk and provide an update when the situation has changed. pic.twitter.com/d6muxTWGr1

Western Cape police spokesperson Sgt Noloyiso Rwexana said on Monday that cases of public violence and malicious damage to property were under investigation following protest action in the area.

“Public order police services and other law enforcement agencies are in the area monitoring the situation. No one has been arrested so far. Mew Way and Japhta Masemola [roads] are closed - protestors are burning tyres in the road. Police will remain in the area until the situation is back to normal,” said Rwexana on Monday afternoon.

Authorities have been stretched to capacity since late last week trying to prevent large-scale land grabs along the N2 highway and in several suburbs across the metro.

On Friday, protesters stoned cars along the N2 highway, forcing the authorities to briefly close the road to traffic.

For several kilometres to the north of the highway, strings of blue plastic tied between sticks stuck in the ground demarcate plots of unoccupied land. People could be seen erecting structures and carrying building material across the highway on Sunday, while protesters closed roads and clashed with police in Blue Downs.

No more load-shedding expected for the rest of the week: Eskom

After days of rolling blackouts, Eskom said on Thursday afternoon there was enough generation capacity to keep the lights on for the remainder of the ...
News
2 years ago

Eskom said it would implement load-shedding until 10pm on Friday - but that the lights will be switched off again from 9am on Saturday.
News
2 years ago

“The SAHRC is further asking the court to void all existing court orders protecting specific sites from invasion,” said Plato.

“In a separate court case brought by land invaders in Hangberg this week, the judge ruled that an illegally built structure which had been demolished must be rebuilt on city-owned land. This is despite two alternatives being offered by the city.

“A sports facility was planned for the invaded site, but the growth of structures now jeopardises this community development opportunity. In Wallacedene this week, residents watched as play equipment was uprooted in a children’s play park by land invaders who have built illegal structures on the land."

A brand new Covid-19 clinic extension in Makhaza, Khayelitsha, was ransacked, allegedly by land invasion protesters, over the weekend, he added.

“It is clear that many thousands of law-abiding residents are silently bearing the severe impact of land invasions due to the unlawful actions of a relatively small group of people who occupy land illegally,” he said.

“My message to the overwhelming majority of law-abiding residents is this: rest assured that the city will keep standing up for you.”

Mayoral committee member for human settlements Malusi Booi said on Monday some land invaders complained that they were kicked out of the places they were renting because they could no longer pay rent.

“Apart from what seems overwhelmingly to be orchestrated attempts, there are the instances where illegal occupiers are claiming they have been evicted by their landlords as they are unable to pay rent,” he said.

“It must be noted this is illegal. Landlords may not evict tenants for non-payment during the lockdown period.

“What we have here is likely a situation of political and other opportunism. Encouraged by those shouting for the city not to act against land invasions and illegal occupation, many now see this as a green light to go and invade land, community facilities and city projects.”

A playdate of young children in an open field in Grabouw, Western Cape, ended in tragedy over the weekend with the fatal electrocution of an ...
News
2 years ago

Levubu clinic outside Louis Trichardt, Limpopo, had been relying on a generator to supply power and water to the facility since September last year.
News
2 years ago
Next Article